African Union chief Nkosazana Dlamini-Zuma asked U.N. Security Council envoys on Tuesday how they might react if asked to defer the international trials of Kenya''s leaders so they can deal with the aftermath of the Nairobi mall attack, diplomats said. 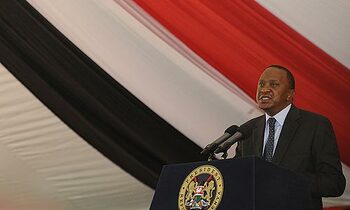 ADDIS ABABA - African Union chief Nkosazana Dlamini-Zuma asked U.N. Security Council envoys on Tuesday how they might react if asked to defer the international trials of Kenya's leaders so they can deal with the aftermath of the Nairobi mall attack, diplomats said.

African leaders are due to meet in the Ethiopian capital Addis Ababa this weekend to take a common stance on whether to join Kenya's planned pull-out from the International Criminal Court (ICC) over the prosecution of its leaders.

Zuma suggested that the AU could decide to formally ask the Security Council to defer trials of President Uhuru Kenyatta and his deputy William Ruto, U.N. diplomats said, speaking on the condition of anonymity. They were attending a meeting between Zuma and council ambassadors in Addis Ababa.

Zuma said African leaders felt that after the attack by al Qaeda-linked group al Shabaab on the Westgate centre in Nairobi last month, Kenyatta and Ruto needed to stay in Kenya instead of travelling to The Hague for their trials, the diplomats said. At least 67 people were killed in the mall assault.

Kenyatta and Ruto face charges of crimes against humanity related to the violence that followed Kenya's 2007 elections, in which 1,200 people died. Both have voluntarily complied with all the court's summonses.

Ruto's trial started last month and Kenyatta's trial is due to start in November. The cases have stirred an increasing backlash against The Hague-based court from some African governments, which regard it as a tool of Western powers.

Several Security Council envoys responded to Zuma by saying the issue of impunity was very important and that if African leaders had any perception of bias by the International Criminal Court then it should be discussed at the court's Assembly of State Parties, not the Security Council, diplomats said.

The Assembly of State Parties, made up of the 122 members of the court, is due to convene in November.

Council envoys told Zuma they would consider any AU request but noted the council had already turned down a previous deferral request in 2011 and rejected a request in May for the cases to be terminated because the council had no such power.

"There's no particular reason to think there would be a different outcome (now)," said one senior U.N. council envoy, speaking on condition of anonymity.

The Security Council is able to defer International Criminal Court proceedings for one year under Article 16 of the Rome Statute that established The Hague-based court a decade ago. The council would need to adopt a resolution to do that.

In May the AU backed a request by Nairobi for the trials to be referred back to Kenya, on the ground that the ICC hearings risked raising ethnic tensions and destabilizing its economy.

Security Council envoys also met the AU's Peace and Security Council in Addis Ababa. In a communique, the two groups voiced concern about security and humanitarian problems in eastern Congo caused by the M23 rebellion and other armed groups.

They urged all countries in the region to fully implement commitments to curb armed groups under a regional peace deal agreed in February and welcomed progress made by a new U.N. peacekeeping brigade in Congo.