President Yoweri Museveni has laid the foundation stone of the proposed 183 megawatts (MW) Isimba Hydropower Project along the River Nile. 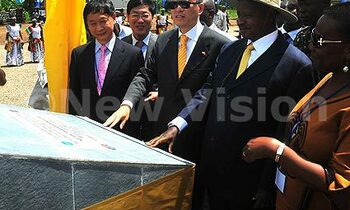 President Yoweri Museveni has laid the foundation stone of the proposed 183 megawatts (MW) Isimba Hydropower Project along the River Nile.

This signifies the commencement of work for the $556m dam. The contractor, China International Water and Electric Corporation, pledged to complete the project in 40 month.

The president, while addressing a rally at the nearby Kikandwa Church of Uganda Primary School, outlined five channels of getting the community out of poverty.

“You need to feed yourself but also earn income. Modern and commercial agriculture is the sure way and it is easy. Subsistence farming won’t get you (households) out of poverty,” he said.

The second path of getting out poverty, according to the president, is industrialization, which not only create jobs but also provide necessities for better living conditions.

“Every day I am opening new factories. Industries are important to the country as well as households,” Museveni said.

The president mentioned service provision, technology and internet and public service jobs as other channels of creating jobs and reducing household poverty.

“You need electricity. If there is no power you cannot progress. We need good roads, communication and electricity to develop,” he said.

“This (Isimba) project will deliver electricity to run factories, small and large businesses. People need to Kulembeka (tapping opportunities) to improve their lives and get out of poverty.”

The minister of energy and mineral development, Eng Irene Muloni, explained that the dam straddles across the river.

“The dam will support a bridge which will open up both Kamuli and Kayunga districts to the rest of the country across the River Nile,” she said.

As provided for by the law, the minister said, both districts will receive royalties from the production of electricity estimated at sh212m every year.