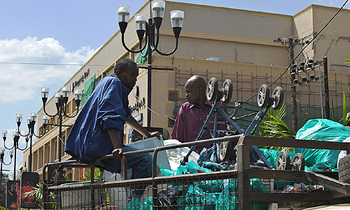 The four-day bloodbath at the upmarket shopping mall, which Kenyan forces brought to an end on Tuesday, left at least 67 people dead.

Politicians from both the parliament's national security and the defence and the foreign relations committee, visited the mall on Monday afternoon, entering the main hall, its floor littered with shattered glass and smeared in blood.

Shop owners reported their stores were looted during the siege, and photographs they posted on social media -- including from a luxury jewelry shop -- show shelves cleaned of goods.

The visit of the MPs launched the start of investigations, which will involve their quizzing of Kenyan security chiefs over the handling of the deadly raid.

"We have taken this matter extremely seriously," said Asman Kamama, head of the defence and the foreign relations committee.

"We want to promise you that as parliament we will investigate, establish and see whether the people who were directly in charge of our security slept on their jobs."

The Red Cross on Monday said the number of people still unaccounted for stood at 39, dropping from the previous figure of 61, after bodies were either identified, or those believed to have been missing were found to have not been at the mall.

Kenyan and foreign investigators continued to comb the carcass of the Westgate mall for clues on the perpetrators of the raid and ensuing siege.

true
Military officers direct the flow of traffic on September 30, 2013 from the wreckage of the Westgate mall. PHOTO/AFP

Part of the rooftop parking of the mall collapsed after heavy explosions and a fierce fire, leaving the key area where the insurgents are understood to have made their final stand -- along with possible hostages -- buried under tonnes of concrete slabs and rubble.

"Government agencies have been conducting forensic and criminal investigations, in addition, bomb experts continued with clearing the building to ensure safe access," the Red Cross said in a statement.

"Heavy mechanical equipment began to move the rubble of the collapsed building ahead of the search for bodies."

The raid was claimed by the Shebab, an Al-Qaeda linked Somali group which has vowed more attacks if Kenya does not pull its troops out of Somalia.

"A week after Westgate, the Kenyan government and Western intelligence officials failed to uncover the facts and details of the Westgate Operation," it added, playing up an apparent lack of information on the attackers and details of how the massacre was planned and carried out.

Islamists also insisted that no woman joined them in the attack, dismissing speculation that British 'White Widow' Samantha Lewthwaite took part in the massacre.

"The Kenyan govt (government) is still chasing its tail by holding on to the hopeless notion that a woman led the attack," the group added.

Lewthwaite, a 29-year-old Muslim convert, was married to Germaine Lindsay, one of four suicide bombers who attacked the London transport network in July 2005, killing 52 people.

The mother-of-three has been on the run in East Africa for around two years and is wanted by Kenyan police for alleged involvement in a separate terror plot.

true
A worker from a supermarket carts away salvaged goods from the wreckage of the Westgate mall. PHOTO/AFP

"We will ensure that we investigate thoroughly so that we understand the lead up to this event, the participants in the event, those who co-conspired to support this event," said Ndung'u Gethenj, chairman of the defence and the foreign relations committee.

"We will make sure that we also understand how the event came to an end and the roles of the various forces."

The lawmakers said they would also "relook and rethink" Kenya's hosting of some half a million Somali refugees, accusing the camps -- such as the word's biggest such site, Dadaab, which hosts over 400,000 people -- as being a "training ground" for Somali extremists.

Somali refugees in Kenya, many who themselves fled the Shebab, have expressed fear they will be targeted in reprisal raids.

Also on Monday, a British man was released without charge after he was arrested in Nairobi following the attack, British sources said.

Eight suspects are currently being held in connection with the raid, one of the worst attacks in Kenya's history.

On Tuesday, Kenyan President Uhuru Kenyatta is due to lead inter-faith prayers in central Nairobi to remember those killed in the attack.