The attempted killing of a leading rights activist, shot in the face by a gunman, triggers international outrage. 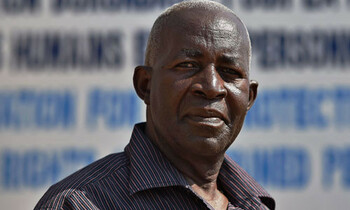 BUJUMBURA - The attempted killing of a leading rights activist, shot in the face by a gunman, triggered international outrage and stoked fears of worsening violence in Burundi.

Pierre-Claver Mbonimpa, who publicly opposed President Pierre Nkurunziza's bid for a third term last month, was shot on his way home from work in the capital on Monday by a gunman on a motorbike.

"His condition is stable, and has even slightly improved," a family member said on Tuesday.

UN Secretary-General Ban Ki-moon condemned "the assassination attempt" and called for the perpetrators to be brought to justice.

"This incident... is part of a growing pattern of politically-motivated violence in Burundi that must be broken before it escalates beyond control," his spokesman said in a statement.

The UN Security Council separately strongly condemned the violent attack targeting the rights activist and voiced concern that the "security situation in Burundi is deteriorating rapidly."

In a unanimous statement, the 15-member council appealed for calm and a return to dialogue while voicing support for regional mediation efforts.

Ban on Monday spoke by phone with Ugandan President Yoweri Museveni who is leading East African efforts to defuse the crisis in Burundi.

Several diplomats, including from the United States and France, as well as African Union officials, were at Mbonimpa's hospital bedside during the night until the arrival of the police.

The shooting followed Sunday's killing in a rocket attack of General Adolphe Nshimirimana, who was widely seen as the central African nation's de-facto internal security chief.

The attacks come just over a week after Nkurunziza was declared the outright winner of a controversial presidential election, securing a third consecutive term despite opposition protests and international condemnation.

On Tuesday evening, shots could be heard in a neighbourhood of the capital Bujumbura where loyalties are split between Nkurunziza's camp and the opposition.

Ruling party CNDD-FDD spokesman Gelase-Daniel Ndabirabe accused the opposition of carrying out a "plan of targeted assassination" against its loyalists, the day after a local party official was shot dead in the east.

Nkurunziza's candidacy was condemned as unconstitutional by the opposition and provoked months of protests that left at least 100 people dead in a fierce government crackdown, as well as an attempted coup in mid-May.

"We are shocked at this blatant attack on one of Burundi's most prominent and respected activists," said HRW's Africa chief Daniel Bekele.

"The Burundian authorities should take immediate steps to secure Mbonimpa's safety and protection."

Amnesty International condemned the "brazen attack" it said was part of "a disturbing escalation" of violence.

Dlamini-Zuma called on the government to investigate the "attempted murder" as well as "all other such killings", including the assassination on Sunday of Nshimirimana, a close aide to Nkurunziza.

In Brussels, the EU said the attack showed the security situation was  deteriorating sharply and called on the authorities to ensure Mbonimpa's safety.

"All sides in Burundi must show restraint and seek dialogue. Violence, from whatever quarter, will not help get the country out of the current political impasse," the EU's foreign affairs arm said in a statement.

The International Crisis Group (ICG) think tank warned the attacks were pushing Burundi to the brink of war.

"There is a qualitative change in the violence," said the ICG's Thierry Vircoulon.

The political crisis in Burundi has seen independent media outlets shuttered and many journalists flee the country or go into hiding because of threats and attacks.