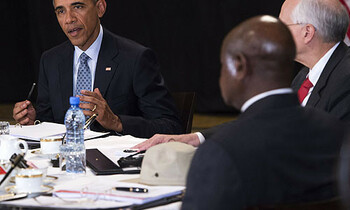 WASHINGTON - US President Barack Obama has renewed pressure on South Sudan's warring leaders, insisting they must accept an August peace deadline or face being sidelined.

During a recent trip to Ethiopia, Obama held talks with regional power brokers and issued the feuding pair an ultimatum to agree a power sharing peace deal by August 17.

Obama -- who waded in after scores of failed peace attempts and long White House internal debate -- demanded an end to a conflict that has killed tens of thousands of people and forced more than two million from their homes.

"If they miss that target then I think it is going to be necessary for us to move forward with a different plan, and recognize that those leaders are incapable of creating the peace that is required," Obama said Tuesday.

He was speaking after a meeting with UN Secretary General Ban Ki-Moon in the White House Oval Office.

A failure to strike a deal is likely to lead to a range of punitive measures including an arms embargo and targeted sanctions including travel bans and asset freezes.

South Sudan, midwifed into existence with US cash and support in 2011, has faltered badly in its infancy and the Obama administration has been accused of abandoning the fragile nation.