The Uganda Local Governments Association (ULGA) has backed the motion to create 39 new counties, saying it will ensure effective representation of the people 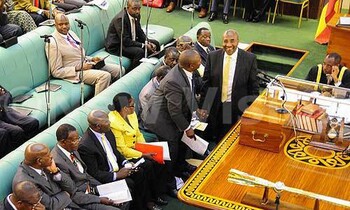 The Uganda Local Governments Association (ULGA) has backed the motion to create 39 new counties, saying it will ensure effective representation of the people.

ULGA president Fredrick Ngobi appeared before the committee of Public service and Local Government on Thursday to give ULGA's contribution to the legislators who are receiving different stakeholders' views on the motion to create more 39 counties.

In his submission to the Committee Ngobi cited article 179 of the Uganda constitution saying;

"Alteration of a district to create an administrative unit shall be based on the necessity for effective administration and to bring services closer to the people."

Ngobi told the MPs that the constitution further highlights issues of communication, geographical location and wishes of the people as forming a basis for creation of new units.

ULGA, a registered legal entity, was formed in 1994 by the district chairpersons at the time, representing their respective local governments, to represent and advocate for the constitutional rights and interests of Local Governments and to act as the negotiating agency for its members.

In his defense, Ngobi said they had got the consent of all their members countrywide.

Appearing before the same committee, law makers demanded to know the budgetary implications, before they approve the motion to create more counties.

Kwiyucwiny said her committee has not yet got the certificate of financial implication laid on the floor of Parliament.

"If we do not get the certificate of financial implication, we will ask the local Government minister Adolf Mwesige to present it, " she added.

Mwesige asked the Electro Commission Boss Dr. Badru  Kiggundu, the budgetary implications of the creation of 39 new counties in terms of new MPs and administration. "Is the money planned in the EC's 2015/2016 financial year budget?" Mwesige asked.

Kiggundu explained to the committee that there would be 40 new counties, resulting into creating 40 more ballot papers.