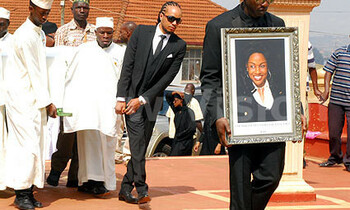 She was later buried in Sanda, Wakiso district. Born in 1955 at Mulago hospital, Sarah was the daughter of Haji Kamadi and Aisha Nsubuga who lived at Wandegeya next to Postal building.

Actually, it is Sarah’s grandfather, Zaidi Musoke Lwaki famous then for his flashy Buick convertible car, who sold to the Government the land on which Wandegeya Postal Building is located after the managers of East African Telecommunications then renting near Makerere University found it strategic for that facility. He used the proceeds to purchase a larger piece of land in Munyonyo, Salama road where Sarah’s uncle Abdullah Mayengo lives.

Sarah’s father worked with British American Tobacco (BAT), Uganda. He was also a striker (number 9) in that company’s football club. He subsequently ventured into private business thereby amplifying his lifestyle as he bought three posh vehicles; British-made Morris alias Kabawo, Germany-made Volkswagen and a DKW with Nyanzi as his driver.

Along the way, Nsubuga separated with Sarah’s mother, thereby marrying a fourth wife in a row. Sarah’s mother then relocated to Kawempe along with her daughter.

As Sarah was going on well with her studies at Kawempe Primary School, her mother got married again; mothering three sons before Sarah dropped out of St. Francis Secondary School. Thereafter, Sarah linked up with her contemporary, Zuena of Kigamba, Masaka who introduced her to Capt. Ali Chama, the head of Suicide Mechanised Regiment army band. Capt. Ali introduced Sarah to the commandant of Masaka barracks, Lt. Col. Christopher Gole accompanied by Zuena and her sister Vena.

Though based in Masaka, Sarah and Zuena often travelled to Kampala courtesy of free transport by Kisoso-Masaka based Catholic businessman Durufu, who owned a white Mercedes Benz and a Peugeot. Sarah thus continued fraternising with other musicians in Kampala like Jesse Kasirivu Gitta of Crane Band.

In 1974, while aged 19, Sarah had the break-through encounter with President Amin. Dressed in a dark stripped suit alias Njonjo, Amin was in Masaka for a function held at New Masaka Town hall (where Crane Bank branch is currently located).

Suicide Band was among the entertainers with Sarah as one of its dancers. Amin was amazed with the way Sarah danced to a song originally done by Chamwangana Matata.

Indeed, he whispered it to Lt. Col. Francis Itabuka, director of state research. Subsequently, a military helicopter arranged by Itabuka picked Sarah from Masaka to fly her to Kampala. Dramatic scenes ensued as Sarah boarded the helicopter when a light-skinned young man, Shami tried to block her as he claimed Sarah to be his wife before Sgt. Murefu chased him away.

Sgt. Murefu is also prominent for cutting the thatch that was used to build the famous hut in Arua in which British military general, Blair entered while kneeling and crawling to meet Amin over the pardoning of Dennis Cecil, the author of The White Pumpkin.

After Sarah was delivered to Nakasero State lodge, Amin paid a private visit to her grandfather at Wandegeya. Later Sarah’s family led by her uncle Abdullah Mayengo and her three aunties visited Amin at Nakasero.

Before organising the second wedding in 1975, Amin sent Sarah on a shopping trip in the German cities of Frankfurt and Bonn accompanied by 20 persons drawn from State House and security. Libyan leader Col. Gadaffi provided the private jet that took them. Amin requested for the plane in his phone call to Gadaffi that was connected to Libya by engineers Francis Kakande, trained in Germany and J.B. Nsanja that operated the Telephone House International Exchange Department headed by Eng. Patrick Masambu.

Five days to the wedding day, Sarah returned with her wedding gowns and was received at Entebbe Airport by Sarah Senkatuka, wife of Maj. Bob Astles. Her team also shopped several television sets which were allocated to State House, Entebbe, Ministry of Information and Broadcasting, Nakasero State Lodge and at Command Post, Kololo.

The second wedding held at Nile Mansion coincided with the July 28-August 1, 1975 Organisation of African Unity (OAU) summit when the Somali President handed over the chairmanship to Amin.

As First Lady, Sarah set up a hotel for her father in Bakuli while Amin bought him a Mercedes Benz S280/SE/SEL. Along the way in their marriage, Sarah unfortunately suffered a life-threatening miscarriage which explains her long delay without producing more children for Amin till they were in exile — Saudi Arabia where they gave birth to Hadijah and Faisal Amin.

At leisure, Amin would play the accordion as Sarah danced for him.

Also, Amin would dance for Sarah while singing his favourite songs like Kabalagala Gonja.

In 1979, when Tanzania intensified its military campaign against Amin, he arranged first for Sarah’s departure to exile in Libya along with Amin’s other children earlier on rescued from Kabale by Sgt. Kahinduhura.

As she departed, Amin assured Sarah that Tanzanian forces would be repulsed. Amin’s optimism was premised on Moroccan government response to President Mobutu’s request for Morocco to reinforce Amin with paratroopers. Amin had obliged to Moroccan authorities’ condition of expelling all Libyan fighters on his side back to Libya. Moroccan government didn’t want to fight alongside Libyans because Gadaffi had on June 11, 1972 angered Morocco and Mauritania by supporting Polisario fighters which in May 1973 had declared a government in exile for Western Sahara.

As Amin was starting to expel Libyan fighters, British and American security learnt of the deal and frustrated it. Amin consequently decided to leave but he was shocked to learn that his other jet had been parked at Nakasongola and his pilot, Lt. Col. Andrew Mukooza had surrendered its keys to UNLA fighters.

Amin joined Sarah in Libya before relocating to Iraq and finally Saudi Arabia. Though they lived together for some time, Amin later developed irreconcilable differences with Sarah before she left for Germany and later Britain. In reaction, Amin contacted a Ugandan businessman who sent him three photos of seemingly beautiful Ugandan women from which Amin selected Nassali as his new wife. Amin fathered three kids with her.

For Sarah, her life in Germany was stressing when she sought a job from the fashion companies where she used to shop from as First Lady. They instead offered to employ her as their lingerie model!

Afterwards, she relocated to Britain. While there, she empathised with Amin when he slipped in a week-long coma in July 2003 at King Faisal Specialist Hospital as Hussein Kato and Mwanga Amin attended to him.

In December last year, Sarah planned to return to Uganda in February, but a relative advised her to do so after next year’s general elections. Her health condition, however, deteriorated in April and on June 11, she unfortunately passed on.


The writer is a researcher