Makerere University academic, administrative and support staff who have been on strike for about a month have suspended the industrial action and agreed to resume work. 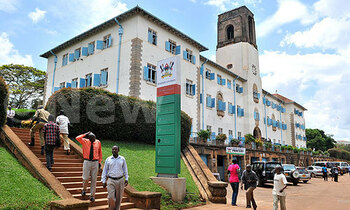 Makerere University academic, administrative and support staff who have been on strike for about a month have suspended the industrial action and agreed to resume work.

The decision was reached in a joint general assembly Thursday morning chaired by Dr. Mohammed Kiggundu, the chairman of the academic staff association (MUASA).

Consequently, the university council is holding an emergency meeting to announce reopening of the university which has been closed for about three weeks.

The development comes after staff associations agreed to the university council’s proposal to consolidate the 36 allowances to pay a 70% top-up incentive allowance to each member of staff on Tuesday.

“Today, (Thursday) 29th August 2013, at the Joint General Assembly of three staff associations has adopted the aforementioned incentive allowance from the University Council, and the staff have agreed to suspend the strike.”
In the new deal, the 36 allowances are to be merged into one incentive stipend paid to all staff members irrespective of their designation.

The university has been closed for about three weeks since academic and administrative staff went on strike demanding for 100% salary increment.

Louis Kakinda, spokesperson of the academic staff association (MUASA), said the new deal only awaits today’s joint staff meeting to decide on calling off the strike.

“We have agreed that the university collects all the money hitherto spent in the 36 allowances and pays it in form of an incentive depending on the individual’s salary scale but not selectively as has been the case,” he added.

Some of the allowances to be scrapped include marking of exams allowance hitherto for academic staff only, and another for teaching evening classes.

The university spends sh25b of its internally generated funds on allowances annually. The unfair allowances have been a source of numerous strikes previously including one in 2011.

Formerly each faculty would handle its own money from the private students.

Staff in ‘dry’ faculties like education and arts used to advocate for the consolidation of the allowances, while their counterparts in ‘wet’ faculties with more revenue from private students would oppose the plan because they earned a better pay.

An analysis New Vision conducted in 2010 indicated that the then vice-chancellor, Prof. Venansius Baryamureeba, was entitled to sh3.8m top-up allowance per month, his deputy sh3.7m, the university secretary sh3.4m, a senior lecturer (PhD holder) sh3.4m and a lecturer sh3m.

In the latest deal, instead of being paid by the faculties, lecturers and other staff will now receive their enhancement package from the center.

It means that those who used to earn more money will forfeit a certain percentage to cater for their counterparts who used to earn less. Other staff like administrative assistants and librarians who used not get top-up allowance at all will also benefit.

For instance, the VC’s allowance will reduce to sh2.05m, his deputy sh1.9m, and a university secretary sh1.6m. Professors will get sh1.7m, associate professors sh1.6m, while senior lecturers will get sh1.4m.

Laboratory assistants, the lowest paid staff members, will get an incentive of sh187,667 while teaching assistants will earn sh203,559.

Kakinda described the incentive as a better offer than the 20% salary increment the university council had presented initially.

“20% increment was very insensitive and demotivating at the same time. Here there is no increase in expenditure. It is only reallocation of the money in the budget,” he stated. “Internally, it is a far better deal than we would have hoped to get last year. Everyone will get something more than the official salary at the end of the month.”

Even if today’s joint assembly calls off the strike, Kakinda said their quest for 100% salary increment from the Government will continue.

Former MUASA chairman Dr. Tanga Odoi also welcomed the new allowance, saying some staff members especially the deans lived like kings at the expense of others.

“Even their dogs were paid better than us,” he remarked.