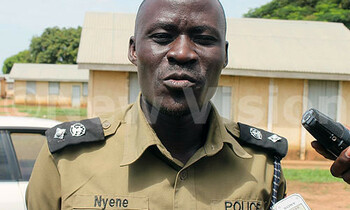 The fire started from a charcoal stove that was left unattended to by the wife of a police officer deployed to guard the store.

The facility was saved by the police firefighting vehicle that was called in as the fire burnt some timber and clothes that were in the house.

Juma Hassan Nyene, the regional police spokesperson says the fire started as a result of reckless behavior of the wife cooking who left the stove unattended to.


The onlookers who gathered to witnesses the incident


He confirmed that the house is a police store but all the guns and tear gas that are kept in were not affected.

"There is no cause for alarm because the tear gas and all other police force things were saved by the fire fighting vehicle that arrived on time," Nyene said.

When asked why the police officer and his wife were allocated to reside in a store of guns, Nyene explained that the officer was deployed so as to guard the facility from the thugs that can break in and steal guns and tear gas.

"We can not leave the store without a police officer guarding it because should thieves sneaked inside and steal the items inside, who would be answerable?" Nyene asked.