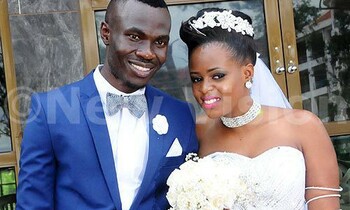 The Cranes striker, a product of the SC Villa conveyor belt, has excelled at top sides such as Villa, Etoile du Sahel (Tunisia), Young Africans and Simba SC (Tanzania).

And yet despite all the lucrative financial benefits tagged to the moves, including the 300,000 (sh972m) switch to Sahel, the forward still felt none of the transfers matched his career aspirations.

However, on Saturday, Okwi finally completed his long awaited career dream move after putting pen to paper on a life matrimonial contract at Miracle Centre Cathedral, Lubaga on Saturday.

The Okwis pose for photographs with family members outside the church

After saying I DO at Rubaga Miracle Center