The Mufti of Uganda, Sheikh Shaban Mubajje, has asked Muslims to reflect on forgiveness as they observe this year's Ramadan.He said forgiveness is a sign of love, unity, teachings that the Koran emphasizes. 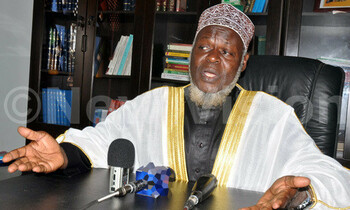 The Mufti of Uganda, Sheikh Shaban Mubajje, has asked Muslims to reflect on forgiveness as they observe this year’s Ramadan.

He said forgiveness is a sign of love, unity, teachings that the Koran emphasizes.

“Ramadan is a month of forgiveness, we reflect on the goodness of Allah. Besides that forgiveness fosters togetherness of people regardless of background,” Mabajje said.

He was delivering the Ramadan message after Jumah prayers at old Kampala National Mosque on Friday.

He warned Muslims against being lured into earthly desires as they would jeopardize their fasting.

“Keep your tongues and body parts from sin. When provoked to fight or quarrel remind them that you are fasting. We all know that Satan can manifest in human beings thus a reason to be careful of someone leading you to sin,” he warned

Mubajje also asked Muslims to forget the past wrangles and focus on the future development of the Islamic religion in Uganda.

“Dwelling on the past wrongs that your neighbours have committed against you is not developmental to you and the religion. Flush those grudges out of your life and you shall be free,” he told the congregation.

He called upon Muslims countries affected by war to settle disputes amicably without use of violence and also tasked Ugandan Muslims to pray for their brothers in the Arab world who are at war with each other.

The Secretary for Hajj, a department at Uganda Muslim Supreme Council tasked with taking pilgrims to Mecca echoed Mubajje’s view and called on Muslims to promote peace in the country.

“Unforgiveness breeds suspicion and insecurity resulting to disputes. Therefore if people forgive each other, we shall live in a peaceful world,” he said.

What you need to know about the Holy month of Ramadan