30% of girls leaving school for lack of sanitary pads

Menstruation in many societies is discussed in hushed tones. Unfortunately, the ripple effect is that young girls across the country are forced to out of school because they cannot deal with it, write Carol Ariba and Carol Natukunda. 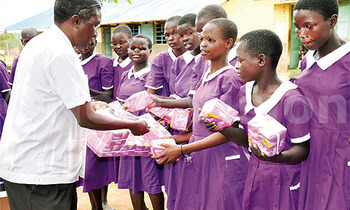 Menstruation in many societies is discussed in hushed tones. Unfortunately, the ripple effect is that young girls across the country are forced to drop out of school because they cannot deal with it.

During my period, I mostly use rags and sometimes toilet paper, but I am most comfortable when I just do not go to school,” Annette Mirembe of Kitwara Primary School in Kiryandongo district says.

“I cannot concentrate in class when I am in my periods because I keep wondering if my dress is soiled,” says Geraldine Abote of Ongatuny Primary School in Bukedea district.

Similarly, Susan Akol of Kasechi Primary School, also in Bukedea district, says at the onset of her period, she carries a sweater and wraps it around her waist to avoid the stares whenever she gets up. She says boys once teased her friend when she soiled her uniform, taunting her that she had slaughtered a hen.

Akol cannot envisage herself going through that. As for her friend, it was the last they saw of her. She decided never to return to school.

Menstruation in many societies is discussed in hushed tones. Unfortunately, the ripple effect is that young girls like Akol’s friend are forced to drop out of school. There are an estimated four million girls said to be in school today. If one million of them have started their periods, yet 80% of the country’s population lives in the rural areas, where menstruation is never freely talked about, then annually 800 girls might be contemplating dropping out of school.

Recently, a symposium on access to sanitary pads for improved girl child retention in schools was held at Fairway Hotel, Kampala.

Organised by Build Africa, a non-governmental organisation with a bias to education, in partnership with Forum for Education Organisation in Uganda, the discussion unearthed a mammoth of facts previously unknown to the public. With it came a revelation of how deep the problem of sanitary pads was eating at the girl child’s education in the country.

Research by Build Africa revealed the alarming statistics and impact this issue has on girl child retention in schools and completion. On average, the report revealed that of the 80 days allocated to a school term, 29.7% of the adolescent girls said they miss a minimum of four days per cycle. This also includes examination days, important class presentations and the introduction of new topics.

Another 24.3% of the girls spoken to admitted to being stigmatised whenever they soiled their uniforms and as a result, they opt to stay at home until after their period. But according to Annette Igunyo, a senior woman teacher in Kapang, Bukedea  district, these girls eventually give up on school all together.

“When they are laughed at by other students, especially the boys, many of them lose the  courage to go back to school,” Igonyo says. Forty five percent of the boys spoken to say they did not have knowledge on menstruation  and their attitude even showed that they thought it an illness that should not get so much as a whisper in public.

Henry Senkasi, the deputy country director of Build Africa, says in many of the schools they visited, there was a provision for a change  of dress for the girls who had soiled their uniforms, but as a result of stigma, the girls were afraid to wear it.

Even worse, Senkasi says, in some of these schools, the girls shared latrines with the boys and had no privacy whatsoever. Often, the girls were bullied out of the toilet when they still needed to use it. “You can only imagine how tough it is for these girls who are still trying to understand these changes amid such huge stigmatisation,” Senkasi says.

The girls say whenever their  periods come, they immediately go home, probably not appearing the entire week. But even at home, the situation is no different. “They are pressurised into keeping the tiny rags they use to pad themselves out of sight from their family members. In the end, they hide them in dark places and sometimes wear them before they properly dry,” Sarah Amulo, of Build Africa says.

Of the girls spoken to, 90% say they use rags to pad themselves and make sure no one sees them hang to dry because it is quite embarrassing. Helen Namaganda, a senior nurse at Soroti Referral Hospital, says however young these girls are, the effect of using a bacterial-infested cloth in their private parts poses a grave danger.

“This is blood we are talking about. Imagine how fast it decays, how much bacteria it can hide, then instead of the full bloom of sunlight, the rag in question is bundled in a dark  corner to dry?” she wonders.

Namaganda says in the end, many of these young girls might battle bacterial infections, candida and all kinds of hygiene-related illnesses and fungi, which might pause a reproductive health threat in future, perhaps even render some of the girls infertile.

To aggravate the problem, only 24.7%  of their parents talk to them about menstruation and general body changes. One of the pupils says when it comes to issues to do with menstruation, puberty, sex or reproductive health, it is a taboo to talk to the male teachers. She adds that the senior women teachers are the only option and yet they have a lot of girls to attend to.

Specioza Kiwanuka, the country director of Build Africa, says this stubborn persistence and pervasiveness of gender disparities in education needs constant review and rethinking of the strategies being used to address such inequalities. “The challenge cannot be left to the education ministry alone,” Kiwanuka says.

Until the Government and development partners commit to this cause, Kiwanuka thinks the number of girls dropping out of school will rise even more.

Jaclyn Amongin, the Woman Member of Parliament for Ngora district, says sanitary pads which cost no less than sh1,500 for the light quality are not in the tiniest bit considered by parents for their children.

“Ugandan women, as we all know, are very fertile. Each mother might bear about 10 children. If she can barely feed them, tell me where she can get the money to buy them sanitary towels every month,” she wonders.

She argues that the solution is finding a local sanitary pad manufacturing company with pads thick enough to prevent soiling of uniforms even for girls with the heaviest of flows and support them to supply these pads for close to nothing.

Rose Seninde, the Wakiso district woman Member of Parliament, in her capacity as chairperson of the parliamentary forum for quality education, says it is time to stop talking and do more. “If the Government distributes condoms free of charge, why shouldn’t they do the same for sanitary pads? This is fast becoming a problem,” Seninde notes.

Furthermore, she urges leaders at different levels to work with the Uganda Parliamentary Forum on Quality Education to move a motion in Parliament for the reduction of the cost of sanitary pads and also lobby the parliamentary budget committee to allocate funds for sanitary pads.

“After all, menstruation is a biological fact that the little girls cannot control, they should not have to be punished for it!” Seninde says. About the recently introduced re-useable sanitary pads, Catherine Abalo of Build Africa, says it is mostly possible in areas where there is plenty of water.

“Most of these families can barely save enough water to take a good bath.  Where will they get that which they can thoroughly wash the pads with?” Abalo asks.

She says much as they may come in handy, society needs to start looking at sanitary pads as a right and not a luxury. One thing is clear: all the stakeholders agree that there is a need to do something before the girl child’s retention and completion levels in school goes even lower.

In the meantime, what can we do?

Most of them can be reused for at least five years, which means five years of not having to buy disposable pads each month. These pads are often made of cotton or flannel and are soft, absorbent, breathable, and conform to the body. They do not have the plastic backing which can chafe and irritate skin and bunch in uncomfortable ways.

Alongside the reusable pads is the menstrual cup which is a flexible cup or barrier worn inside the vagina during menstruation to collect menstrual fluid. Contrary to the disposable pads, the cup collects menstrual fluid rather than absorbing it. Menstrual cups are usually made from medical grade silicone and can be reused several times.

30% of girls leaving school for lack of sanitary pads