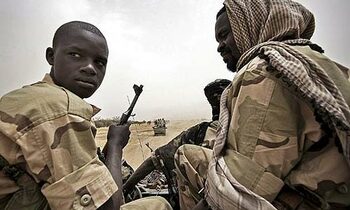 Residents in al-Rachad, in the central North Kordofan state, an agricultural area that produces much of Sudan's gum arabic, exported for use in soft drinks, said they could hear explosions and intense gunfire outside the nearby town of Jebel al-Dayer.

"People have arrived here today fleeing fighting in the area of Jebel al-Dayer," said a resident of Rachad, asking not to be named.

Gibril Adam, spokesman for the Justice and Equality Movement (JEM), one of the biggest rebels groups in Darfur, said its fighters had attacked an army position. "We handed the army a defeat," he said.

Military spokesman al-Sawarmi Khalid said the rebels had attacked a village "with the goal of stealing from citizens", state news agency SUNA reported.

He said the army had repelled the attack and that five of its soldiers were killed, while the rebels suffered "big losses".

Rachad is close to the state capital El-Obeid and Um Rawaba, a city which JEM and other rebels stormed for one day in April, shocking the army by moving their fight from their remote borderlands to within 500 km (300 miles) of Khartoum.

Their assault on the region - their boldest since attacking Khartoum in 2008 - has displaced more than 50,000 civilians and soured relations with South Sudan, which Khartoum accuses of backing the rebels.

Juba denies the accusation, but Sudan has threatened to close by Aug. 7 the two pipelines that carry oil exports from landlocked South Sudan unless it stops backing the insurgents.

"South Sudan's continued support (for the rebels) leads to instability in the region," Sudan's foreign ministry said in a statement, without mentioning Wednesday's fighting.

JEM is part of the Sudanese Revolutionary Front (SRF), an umbrella group that seeks to topple President Omar Hassan al-Bashir and end what it says is the dominance by wealthy Arab Khartoum elites of Sudan's rural areas.