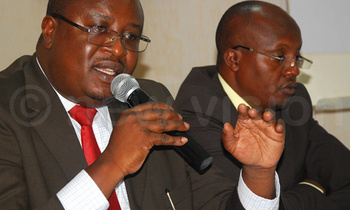 CIVIL Society Organizations (CSOs) have expressed concern over the proposed amendment to Article 26 of the Constitution on land acquisition by Government saying it would disrupt citizens' right to own property.

In a joint statement read by Henry Mugisha the Executive Director Water Governance Institute on behalf of the CSOs, the proposed change is not just a procedural change but a veiled assault on the right to property.

He added that without the assurance of prompt payment of fair and adequate compensation prior to the taking of possession or acquisition of property, citizens are effectively deprived of their right to property for an unspecified and indeterminate amount of time.

Mugisha was speaking at a CSO breakfast meeting on land acquisition held at held at Hotel Africana on Thursday.

According to the current constitution, as such an acquisition can only occur after payment or fair adequate compensation to the relevant parties so as to ensure that citizens' rights to property are not violated at any point in the progress.

Edmond Owor the Executive Director Uganda Land Alliance said Government should offer land owners to be shareholders of the investments carried out in their land.

"If investors came and had an agreement with the land owners, make them part of that investment. That way, you will be assuring these communities that all is not lost," Owor said, adding that mere compensation is not enough for them.

Currently the Constitutional Amendment Bill is the most talked about bill today, following next year's presidential general elections. However the bill was tabled yesterday for the first reading.