Up to 30 feared dead in fuel tanker accident 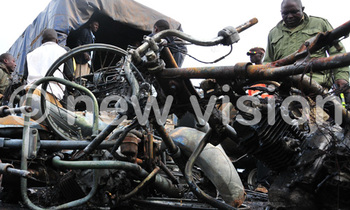 AT least 29 people have been confirmed dead after an accident involving a fuel tanker occurred on Saturday night at Namungoona Kasubi along the Northern Bypass.

According to Kampala Metropolitan Police commander Andrew Felix Kaweesi, a fire broke out after the accident leaving 29 others critically injured. The injured were rushed to Mulago Hospital for treatment.

What is left of the cars is towed from the scene of an accident. Photo by Matthias Mugisha

The burnt out car (C) which rammed into the rear of the tanker (R) causing fuel to leak. Photo by Matthias Mugisha

However Kaweesi said the death toll is expected to rise.

“Preliminary investigations reveal that the cause of the fire was a result of an accident involving a station wagon (Toyota Noah) registration number UAS 374C white in color which rammed into a moving fuel tanker Reg No. KBL 361B white in color,” said Kaweesi.

Kaweesi made the remarks this morning while addressing journalists at the central police station in Kampala about the accident.

What is left of the cars is towed from the scene of an accident. Photo by Matthias Mugisha

Police sealed off the Northern Bypass after the incident. Photo by Matthias Mugisha

He explained that the accident between the two cars caused damage at the rear side of the tank resulting into fuel spilling onto the road and down into the papyrus swamp on the left which had water and a paved channel on the right .

An abandoned helmet next to a burnt out motorcycle at the scene of an accident. Photo by Matthias Mugisha

State House sent out a message to Ugandans in which it said President Yoweri Kaguta Museveni was saddened by the loss of lives.

Museveni has been in Dar es Salaam participating in the Smart Partnership International Dialogue but is closely monitoring.

"Dear Ugandans, I have learnt with great shock of the tragedy in which vehicles have been burnt by a fuel tanker at Namungona causing loss of lives. Am closely monitoring efforts of the Police and Health workers at the scene."

The interior of the car that rammed into the fuel tanker to cause the leak. Photo by Matthias Mugisha

While police is trying to establish the identities of the dead, they have issued a list of names for the injured persons that are currently receiving treatment at Mulago Hospital.

Up to 50 feared dead in fuel tanker accident