The president of domestic football body FUFA said yesterday that their decision to extend Milutin Sredojevic's contract was taken because his achievements outweigh the shortfalls. 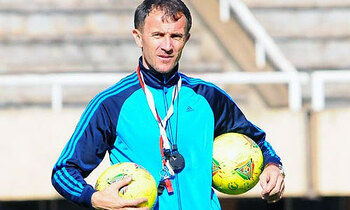 Failure to qualify for the All Africa Games (U-23 team)

Failure to qualify for the AFCON finals

Under him, Cranes lost at home for the first time since 2005

The president of domestic football body FUFA has said that their decision to extend Milutin Sredojevic’s contract was taken because his achievements outweigh the shortfalls.

The Serbian, who took over as Uganda Cranes coach two years ago, has been given a three-year contract.

He added that the coach, fondly referred to as Micho, has been retained to maintain consistency in various national squads.

The decision brings to an end speculation on whether or not Micho would keep the job or get a move outside the country.

Magogo explained that their decision to keep Micho was also prompted by written endorsements from what he called ‘African football technocrats’.

“We have endorsements from football technocrats in Zambia, Ghana, Nigeria and South Africa,” Magogo added.

Magogo went on to say that they resolved to keep Micho because his salary and other entitlements are affordable.