Iraq has vowed to reclaim the entire country from jihadists after retaking Tikrit from the Islamic State group, as its forces fight to consolidate control of the city. 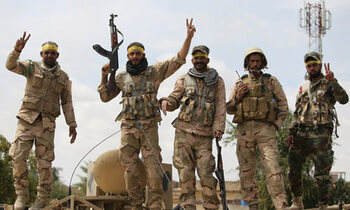 TIKRIT - Iraq vowed Wednesday to reclaim the entire country from jihadists after retaking Tikrit from the Islamic State group, as its forces fought to consolidate control of the city.

Speaking from a newly-recaptured area of central Tikrit after a month-long operation that was Baghdad's biggest success yet against IS, Prime Minister Haider al-Abadi said the government was "determined to liberate every inch of Iraqi land".

But Tikrit is far from secure, with various officials saying that IS militants were still present in the city, while bomb-rigged houses and buildings also pose a major threat.

Interior Minister Mohammed al-Ghaban told journalists in Tikrit that there were "a few pockets (of IS fighters) remaining in some of the neighbourhoods".

And a commander from the Ketaeb Imam Ali militia, one of the paramilitary forces fighting alongside police and soldiers, reported clashes with IS in the city's north in the morning.

They "tried to advance on the university", Rasul al-Abadi told AFP, referring to Tikrit University on the northern edge of the city that has served as a base for pro-government forces.

Ghaban said IS fighters were trying to cross the Tigris river, east of the city, to escape.

Supporting that assertion, a paramilitary commander said the jihadists launched an attack Wednesday from a mountain hideout northeast of Tikrit in an attempt to open a safe passage for fleeing militants.

There has been concern that Iraq does not have enough specialised ordnance clearance teams to handle the large quantity of traps left by IS fighters.

Ghaban said security forces had so far found 185 rigged houses and about 900 other bombs.

One militiaman said he fired a rocket-propelled grenade to dispose of a suspected car bomb in central Tikrit.

Columns of black smoke rose from various burning houses and buildings in the city.

Some of the dozens of palaces in dictator Saddam Hussein's massive complex on the eastern side of the city were smashed by shelling or air strikes, but other areas of Tikrit were comparatively lightly damaged.

Militiamen have quickly set about spray painting the names of their groups on walls and windows, and also looted items including clothes, shampoo and shaving cream from shops in central Tikrit.

There is still evidence of IS's almost 10-month presence in the city, including the group's black flag painted on walls and writing identifying some buildings as "properties" of the jihadists' self-declared state.

On Tuesday, Abadi claimed the city was retaken but the US-led coalition supporting Baghdad from the air said IS still held parts of Tikrit.

"We are coming, Anbar. We are coming, Nineveh," he said in a recorded address, referring to the last two provinces still largely controlled by IS.

The loss of Tikrit further isolates Mosul, the capital of Nineveh and the main IS hub in Iraq, with Baghdad's forces now poised to push north while Kurdish forces close in from the three other directions.

Zaid al-Ali, author of "The Struggle For Iraq's Future", said however that the fighting in Tikrit was made easier because the city was largely emptied of its population even before the operation began on March 2.

"Mosul still has a large civilian population, which will make things very complicated," the analyst said.

The government has provided no information on how many of its fighters were killed, wounded or captured in the battle, but Baghdad's forces are believed to have suffered significant casualties.

The army and police, as well as pro-government paramilitary forces dominated by Iran-backed Shiite militias, completely surrounded Tikrit within two weeks of launching the operation, but it then stalled and Abadi requested coalition strikes, which began on March 25.

Iran was Baghdad's top foreign partner for much of the operation -- involvement evidenced by graffiti in Persian in the city.

The Iraqi government had tried and failed several times to retake Tikrit, but the latest operation was much larger and better organised.

When Iraqi forces retook Saddam's palace complex, they also found sites believed to contain the bodies of mainly-Shiite recruits executed by IS last year in a massacre that stoked widespread anger and helped rally support for the battle against the jihadists.

"They were innocent people."