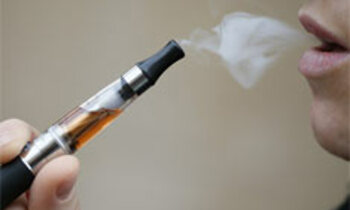 Most experts agreed, however, that use of the devices, about which research warns that not enough is yet known, should be regulated to prevent their use by non-smokers.

Konstantinos Farsalinos, researcher from Onassis Cardiac Surgery Centre in Athens, told AFP that in a study of nearly 19,500 people, mainly in the United States and Europe, 81 percent of participants said they had quit smoking by using e-cigarettes.

"In fact, they quit smoking very easily within the first month of the e-cigarette use on average," he said.

"That’s something you don't see with any other method of smoking cessation."

But on Wednesday, World Health Organization (WHO) chief Margaret Chan voiced support for governments that are "banning... regulating" e-cigarette use.

She was speaking to reporters at the World Conference on Tobacco or Health, hosted by the capital of the United Arab Emirates which has so far banned the devices.

"Non-smoking is the norm and e-cigarettes will derail that normality thinking, because it will attract especially young people to take up smoking," said Chan.

"So I do not support that."

But for Jean-Francois Etter, associate professor at Geneva University, "e-cigarettes and nicotine and tobacco vapourisers should not be excessively regulated".

This could "decrease the numbers of smokers who switch to these new products", benefiting "only the big tobacco industry" whose leaders "will be able to survive in a tightly regulated environment".

Etter called the WHO stance on e-cigarettes "political".

"I think that the WHO people should know better than kill alternatives to smoking cigarettes," he said.

E-cigarettes were first produced in China in 2003, and have since spread globally.

They have sparked what several participants at the gathering called a "very divisive debate".

Alan Blum, a family doctor and director of The University of Alabama Center for the Study of Tobacco and Society, says he would usually recommend e-cigarettes to patients trying to quit smoking rather than "give a pharmaceutical product which has side effects and which have not worked very well".

But he also warned that e-cigarettes are being used by schoolchildren and that some people use cannabis and marijuana in the devices.

Citing a recent but yet unpublished study, Farsalinos insisted that "if three percent of smokers switch to e-cigarettes we are going to save about two million lives in the next 20 years".

"There is not a single case of a never-smoker who used e-cigarettes and then became a smoker of tobacco cigarettes," he said.