Fighting has raged on in Ukraine, throwing doubts on a ceasefire deal, with the US saying Russia is still deploying heavy arms and Kiev. 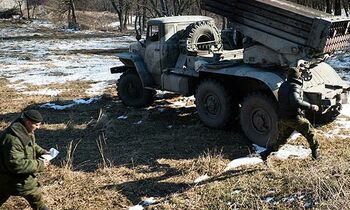 DONETSK - Fighting has raged on in Ukraine, throwing doubts on a ceasefire deal due to take effect over the weekend, with the US saying Russia is still deploying heavy arms and Kiev warning that shelling of civilians had intensified.

Ukrainian President Petro Poroshenko said Friday that the continuing bombardment of civilians in eastern Ukraine by pro-Russian separatist rebels was already undermining the peace plan reached in Minsk a day before.

At least 28 civilians and soldiers were reported killed in the latest upsurge in fighting.

"Unfortunately after the Minsk agreement, Russia's offensive has significantly increased. We still think that the agreement is in great danger," Poroshenko said during a meeting with Hungarian Prime Minister Viktor Orban.

"After what we concluded in Minsk, these are not only attacks against civilians but also against the Minsk agreement," he added, referring to the shelling of the town of Artemivsk that killed three people including a seven-year-old.

The ceasefire, due to take effect from 2200 GMT Saturday, will be the first test of the commitment by Kiev and pro-Russian separatists to the freshly-inked peace plan.

But with separatists fighting to conquer more territory ahead of the truce and Kiev forces digging in, there are fears over whether anyone will observe the truce, considered vital to the success of the peace roadmap.

The UN Security Council is expected to meet on Sunday for an emergency session to shore up the ceasefire deal, diplomats said.

The United States said it believed Russia was continuing to deploy heavy weapons ahead of the ceasefire.

State Department spokeswoman Jen Psaki said the US had received reports of heavy weapons being moved into eastern Ukraine from Russia over the past few days, and more apparently on the way.

"This is clearly not in the spirit of this week's agreement," Psaki told reporters.

She said the Russian military had deployed large amounts of artillery and multiple rocket launcher systems and was using them to shell Ukrainian positions.

Friday's fresh fighting came after rebels and Kiev agreed to the wide-ranging plan on Thursday following marathon talks in Minsk between the leaders of Russia, Ukraine, France and Germany.

German Chancellor Angela Merkel has warned Russia that the EU, which has already slapped Moscow with sanctions over the crisis, is not ruling out further measures if the truce fails.

The G7 nations -- Canada, France, Germany, Italy, Japan, the United Kingdom and the United States -- also voiced concern about the violence and the build-up of weapons in eastern Ukraine.

Welcoming the peace plan, the group of industrialized nations called on all sides to refrain from moves that could scuttle the deal.

The G7 warned it was ready to "intensify the costs" for anyone who broke the terms of the agreement.

Ukraine's deputy defence minister Petro Mekhed, meanwhile, accused the rebels of wanting to "raise their flag" over railway hub Debaltseve, scene of the most bitter recent fighting, and strategic port Mariupol ahead of the ceasefire.

"Ukraine is expecting an escalation and taking all necessary measures to be able to respond," Mekhed told journalists.

The fragile agreement was seen as the best hope of ending the conflict, which has killed at least 5,480 people and ratcheted East-West tensions to highs not seen since the Cold War, but scepticism remains high after the collapse of a similar previous peace plan.

Kiev and the West accuse Russia of stoking the war in ex-Soviet Ukraine by pouring arms and troops to help the pro-Russian rebels fighting Kiev government troops in Ukraine's industrial east. Moscow denies the charges.

Ukraine's military said that fighting remained fiercest around Debaltseve, with rebels firing missiles at the beleaguered railway hub mid-way between the main separatist bastions of Donetsk and Lugansk.

Kiev has accused Russia of deploying another 50 tanks across the border during the talks in Minsk.

Rebel leaders -- seen by the West as Kremlin puppets -- have said the new deal raises hopes of peace but warned there would be no more talking if it fails.

The new Minsk agreement is broadly similar to an earlier failed deal in September, except that the new heavy weapons-free zone will be 50 to 140 kilometres (31-87 miles) wide, depending on the range of the weapon -- double the width of the buffer zone agreed in September.

Kiev will also begin retaking control over the approximately 400-kilometre (250 mile) stretch of Russia's border with rebel-held Ukraine, but only after local elections are held.

The border is entirely under Russian and pro-Russian rebel control and is used, according to Kiev, as a conduit for separatist supplies.

Separatist-held territories will be granted a degree of autonomy to be established through talks.