Prime Minister Benjamin Netanyahu warned Lebanon's Hezbollah it will pay the "full price" after missiles killed two Israeli soldiers Wednesday in an attack that raised fears of another all-out war. 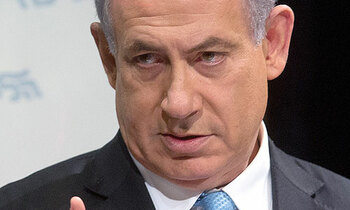 Prime Minister Benjamin Netanyahu warned Lebanon's Hezbollah it will pay the "full price" after missiles killed two Israeli soldiers Wednesday in an attack that raised fears of another all-out war.

A Spanish UN peacekeeper was killed as Israel and Hezbollah exchanged artillery fire -- the most serious clashes between the bitter enemies in years -- following the attack by the Shiite militant group.

"Those behind today's attack will pay the full price," Netanyahu's office quoted him as saying at a meeting with Israeli's top security brass Wednesday evening.

The two soldiers were killed when Hezbollah fired an anti-tank missile at a military convoy in an Israeli-occupied border area, the army said.

Seven other soldiers were wounded, but none were reported to have suffered life-threatening injuries.

The UN Security Council called an emergency meeting to discuss ways to defuse tensions between the two sides, who fought a month-long war in 2006.

Israel responded to the Hezbollah shelling with "combined aerial and ground strikes" on southern Lebanon -- an apparent retaliation for a recent Israeli strike on the Golan Heights that killed senior Hezbollah members.

The United States stood by Israel after the exchange of fire and condemned Hezbollah's shelling of an Israeli military convoy.

"We support Israel's legitimate right to self-defence and continue to urge all parties to respect the blue line between Israel and Lebanon," State Department spokeswoman Jen Psaki told reporters.

Clouds of smoke could be seen rising from Majidiya village, one of the hardest hit. There was no immediate information on casualties.

A 36-year-old Spanish corporal from the UN peacekeeping force in southern Lebanon was killed in the exchange of fire, officials said.

It said the precise cause of the peacekeeper's death was "as yet undetermined" and urged all sides to show "maximum restraint to prevent an escalation".

"There were several casualties in the enemy's ranks," Hezbollah said.

Israel said mortar fire was also aimed across the border at several military facilities. There were no casualties.

Hardline Foreign Minister Avigdor Lieberman said Israel should respond to the attack "in a very harsh and disproportionate manner, as China or the US would respond to similar incidents".

"This is not necessarily the last response," he wrote on Twitter.

Hezbollah's attack was hailed by the Palestinian Islamist groups Hamas and Islamic Jihad.

Israeli security sources said at least one house had been hit in the divided village of Ghajar, which straddles the border between Israel and Lebanon.

"Three houses were hit by rockets," said Hussein, 31, relaying what he had heard by telephone from relatives in the village of 2,000 inhabitants.

He said a number of villagers had been wounded but did not know how badly.

Other frantic family members argued with police to be allowed in to collect their children, who had been locked inside the village school for their own safety.

Tension in the area had been building, especially after an Israeli air strike on the Syrian sector of the Golan Heights killed six Hezbollah fighters and an Iranian general on January 18.

The day before the raid, Hezbollah leader Hassan Nasrallah threatened to retaliate against Israel for its repeated strikes on targets in Syria and boasted the Shiite militant movement was stronger than ever.

During a Wednesday evening meeting with senior military and intelligence officials, Netanyahu sent a warning to the government of Lebanon and to Syrian President Bashar al-Assad.

"The government of Lebanon and the Assad regime share responsibility for the consequences of attacks originating in their territory against the state of Israel," he said.

Israeli army spokesman Lieutenant Colonel Peter Lerner said Wednesday's attack was the "most severe" Israel had faced since 2006, when it fought a month-long war with Hezbollah that killed more than 1,200 people in Lebanon, mostly civilians, and some 160 Israelis, mostly soldiers.

Israel occupied parts of Lebanon for 22 years until 2000 and the two countries are still technically at war.

Wednesday's missile attack was on Israeli forces in the Shebaa Farms area, a mountainous, narrow sliver of land occupied by Israel since 1967.