Following the discovery of oil in Bunyoro, one of the most underprivileged areas of Uganda, most people in the region jubilated in anticipation of immense benefits. 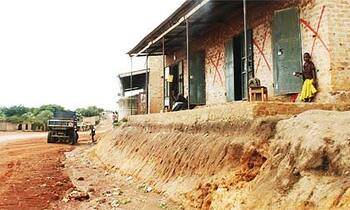 By Andrew Masinde and Robert Atuhirwe

Following the discovery of oil in Bunyoro, one of the most underprivileged areas of Uganda, most people in the region jubilated in  anticipation of immense benefits.

In the establishment of infrastructure to enable the exploitation of the oil, several people who owned land along the route that was needed to build the Hoima- Kaiso Tonya road leading to the oilfi elds were affected. The law required that they be adequately compensated for the lost land before being evicted.

However, a number of them who spoke to the New Vision are crying foul that the compensation process was fl awed. They argue that the money paid was peanuts and not commensurate with the value of their land and the property on it.

Have owners been cheated?

Even before the actual oil production starts, there appears to be simmering tension and a tide of dissatisfaction among the 1,500 landowners who accuse the Uganda National Roads Authority, of cheating them.

They are now demanding adequate compensation on mutually agreeable terms. Many say they were not even consulted on how much their land and property was worth before the compensation process started.

One of the affected tenants, Rebecca Littu, still operates a small eatery in a structure partly demolished by the road contractors in Buseruka trading centre, Hoima district. The 42-year-old widow has six children whom she has sent to different relatives for fear that the damaged house could collapse any time.

“I have lived in this place all my life and all my six children were born here. My husband bought this land at sh3m and the money spent on the constructing the five-door rentals is much more than the sh42,500 I was paid as compensation.”

“This world is unfair to those who are powerless. We have visited several offices but nothing seems to work so we are just here waiting. Maybe one day the Government will remember us and pay for the property they have destroyed plus our land,” Lutti explains as tears roll down.

Like Lutti, over 4,000 residents are affected by the 92km road, which links Hoima town, the mid-western regional administrative centre, to the Kaiso-Tonya area where oil was discovered. The murram road is being upgraded to tarmac.

Patrick Ntamala, another resident of Buseruka, waspaid only sh48,000 and assured that more money was to come shortly. However, he says it is now two years and he is still waiting for the money. “I have lost hope. I bought this land at sh3.7m and now half of it has been taken away. The rental I have established cost me lots of money. There seems to be no hope for me to get a fair compensation.”

He adds that a lot of people were excited with the oil discovery but now believe being grabbed from them. He also says some officials claim they are Congolese so they have no right to own land in Uganda yet they are Ugandans.

Article 26 of the 1995 Constitution provides that no person shall be compulsorily deprived of property except where, among other conditions, there is payment of fair and adequate compensation, prior to the acquisition or taking possession of the property.

Who approved the rates?

The Minister of State for Works, John Byabagambi, said his ministry used the rates approved by the district. “Maybe the district failed to update the rates, so we are going to look for a way of verifying them,” he added. He also said a lot of land had multiple owners so some people were paid yet they were not the rightfull owners of the land.

In some cases, the deceased owners did not leave back letters of administration making it difficult for the land verifi ers to know the right full owners.

The minister said the local council officials should be held responsible, saying they signed the verifi cation forms. “As a ministry, it’s our mandate that all people are compensated so were going to review the compensation process and we are going to work with the Uganda National Roads Authority (UNRA) to see that the matter is resolved.”

However, the chairperson of Bujumbura division, Jackson Amanya, said local leaders were not consulted when the road issue started. He added that those who claim that local leaders signed on behalf of the land owners should show where they signed and name those they consulted.

“They should not put their blame on us as local leaders, they should produce evidence of the minutes where we drafted the compensation process and even the names of those who were involved and those who signed,” Amanya added angrily.

UNRA spokesperson Dan Alinange says some people were people giving wrong advice to the land owners. “We compensated people fairly before the road process started. The rates were determined by the district and we also did a survey and we paid people according to the land market value by that time.

“We have spent sh10b on compensation so far and the process is still going on. People should stop confusing the public that land owners were not adequately compensated,” Alinange explained.

State minister for Bunyoro affairs Ernest Kiiza said the matter was being handled. “When I went to the ground, I discovered people were not paid fairly and this was after looking at the forms they signed, so I did another evaluation survey with UNRA members and soon we are going to compensate them.

“People should not lose hope. The process is soon starting though there are  those who were compensated fairly but still complain. They are the ones confusing others and complicating the issue,” Kiiza explained.

Buhanguzi county MP Julius Bigirwa Junjura says the Bunyoro MPs petitioned Parliament but the matter has not been concluded. “We wrote a  petition to the President but the matter is being handled at a slow pace but they are always promising that things would be solved.

“We also raised the matter with the Ministry of Works and the offi cials said many people didn’t have land titles, so people have to wait until the conflict is resolved,” stated Bigirwa.