Golola weighs in at 73kg

IN his previous weigh-ins, Golola has been fond of vowing going to crash his opponents; including famously threatening to turn his caucasian rivals black 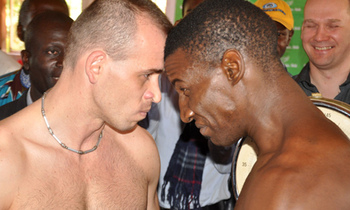 AT this morning’s weigh-in at Hotel Africana in Kampala, Moses Golola placed his upcoming fight with Hungarian Betya Istavan in the hands of God.

“I have done my part by training hard and sharpening my skills and now it's God to lead me in Friday’s fight. I have a feeling that this time around, He is on my side,” Golola confessed.

Golola who has been undergoing a rigorous training regime, weighed in at 73 kgs, one kilogramme lighter than Istavan.

In his previous weigh-ins, Golola has been fond of vowing going to crash his opponents; including famously threatening to turn his caucasian rivals black but he cut a less eccentric figure today.

Uganda Kickboxing Federation President Hassan Ssekirime was on hand to read out the two fighters profiles and Istavan’s sounded richer.

The current European champion has 30 fights on his card, 10 more than Golola with 20 wins of which 5 are Kos and 10 losses. Golola has suffered only 3 losses, 3 draws and won 14 with 9 K.Os.

The Hungarian kick boxer did showed his interest in the fight before ring time by putting his fist on Golola's jaw after the weigh-in process and the later was humbly smiling.

Golola and Istavan share a light moment after the weigh in. Photo by Michael Nsubuga

When New Vision Sport asked Istavan what he knew about Golola and the fight in general, he replied with total calmness.

“I have seen his fights on youtube and I think am going to enjoy the challenge,” explained the Hungarian.

Golola's last two defeats on home soil came via two Hungarians; Andras Nagy and Mate Zsamboki and now, a hattrick of losses is on the cards. But Golola rubbished this happening.

“I have to avenge and send a message to the rest of Hungary with concrete solid punches and kicks. I have quit drinking porridge and I am now on a diet of cement. He will go down.” Golola vowed.

Under a new promoter Benon Kasenene, Golola has worked his way back into the spotlight after a couple of humiliating losses and he consider this his golden chance to silence the critics.

The question remains; will he do it?

Golola weighs in at 74kg