Could Kenya's president Uhuru be our grandson?

It was an innocuous story published in the inside pages of New Vision on Tuesday, about the Omukama of Bunyoro, Solomon Gafabusa Iguru, congratulating the new president of Kenya, Uhuru Kenyatta, on his election. 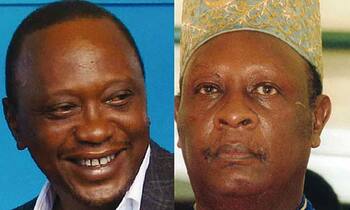 It was an innocuous story published in the inside pages of New Vision on Tuesday, about the Omukama of Bunyoro, Solomon Gafabusa Iguru, congratulating the new president of Kenya, Uhuru Kenyatta, on his election.

In the message the Omukama cited the old cordial relations between Bunyoro and Kenya and recalled how the late Jomo Kenyatta often visited the Omukama’s father, the late Sir Tito Winyi.

Nothing really world-shaking, and definitely nothing new, but soon it was all over the social media, and Ugandans were talking about ‘Iguru congratulating his cousin’. Ugandan bloggers were all over it too, while the Kenyans dismissed it outright as a rehashing of an old fairy tale. true

The theory that the first  president of Kenya was a son of the Omukama Kabalega (right) of Bunyoro-Kitara has long been the love and rage of conspiracy theorists, and the remarkable resemblance between Kabalega and Jomo Kenyatta has continuously fuelled them.

Uhuru Kenyatta’s ascendancy to the president of Kenya has again brought them forth, but is there any truth or evidence to these theories? No real facts have been established, but a lot of circumstantial evidence exists, so much that this might never really be put to rest.

But the speculations still persist. A guide to the Seychelles, where Kabalega was to spend 24 years in exile, mentions that ‘Kabalega was a father to a prominent politician in the region’.

*Kabalega and Mwanga were captured in the plains of Lango in 1899 by a combination of British and Buganda troops, and Kabalega was shot in the right arm.

They were then matched into exile after that. What is known is that they spent some time in Kenya before being moved first to Kismayu in Somalia and then onto the Seychelles, because of interference from ‘malcontents’ in Uganda.

*The two kings were under constant guard by the British, and apparently several attempts to rescue the two were made. Their minders kept up a constant update of their progress to the Colonial Administration in the form of dispatches.

*Dispatches to the foreign office covering the journey from Uganda ones are from Kismayu as the two embark onto the journey to the Seychelles. Although the dispatches were listed on the catalogue of the Kenya Government Archives, the actual documents were not there when we last checked.

*Available colonial records  indicate that the wounded Kabalega was given a ‘Kikuyu nurse’ to take care of him when the two kings stopped at a place named as ‘Kikuyu’.

Uncorroborated reports have it that the Kikuyu nurse got pregnant, but the fact was kept secret from the British.

There are different reports of the date of Kenyatta’s birth and time and place of his birth. But historians agree that he was born Kamau Ngengi in a place called Ngenda between 1897 and 1901, about the same time Kabalega is said to have lived in Kenya on a two-year sojourn.

It is also agreed by historians that Kenyatta’s father died when he was young and his mother subsequently remarried. But she is said to have gone back to her parent’s home further north, where she died.

He was baptized in Johnstone Kamau in August 1914, but later adopted the name Jomo (Kikuyu for burning spear) Kenyatta (from the waist bead belt worn by natives then).

Bunyoro Kingdom sources refused to answer any questions pertaining to Kabalega and Kenyatta, or why the Omukama had congratulated Uhuru Kenyatta.

About the Jomo Kenyatta visits to Bunyoro, they said it was ‘normal’. When asked if Uhuru has visited the kingdom, they said ‘not yet’.

So, will this mystery ever be solved? A detailed study of the colonial dispatches covering the journey of the two kings from Uganda to Kenya would definitely give an account of what really happened, and there is some indication that Bunyoro Kingdom offi cials have actually done this, and know the story.

The debate going on social media right now is whether the Kenyatta family would consent to a DNA test and what would be the implications if they did?

What would the Kenyans do if their President turned out to be actually of Ugandan descent?

Could Kenya’s president uhuru be our grandson?