Back to serious business. Uganda's Ellah is back on the Big Brother Africa Hotshots chopping block following Monday evening's nomination. 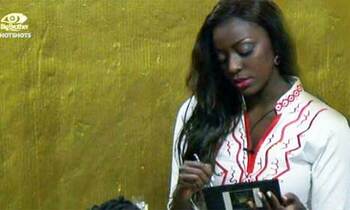 Back to serious business. Uganda’s Ellah is back on the Big Brother Africa Hotshots chopping block following Monday evening’s nomination.

She had survived the whole nominations ordeal only for Macky2, Head Of House (HOH), to add her on the nomination list. She is up against Goitse, Idris, JJ, Sipe, Sheillah, Tayo and Trezagah.

It is a tough group of opponents for her but there is possibility she will survive the hurdle and have a say on $300,000 jackpot.
Macky 2’s status as this week’s HOH means he is a confirmed finalist but that does not mean the same with JJ, his assistant HOH.

Sheillah is already feeling the brunt of being up for eviction from what we watched last night. She vented her frustration last night on Ellah for being flirtatious, after Tayo hinted he caught the Ugandan beauty queen flirting with Nhlanhla.

Was she just jealous? And is it Sheillah’s game to rave whenever she is up for eviction?

We all know Nhlanhla and Sheilah had a thing going on recently, right?

Anyway, Ellah just ignored her rants and went about her business. One can tell tension is rising in the house and, perhaps, housemates are now unleashing their true selves.

It is now a game of surviving, not just mere fun.