The Police have stopped a sh28b loan payment by the Uganda Development Bank (UDB) to a private company following allegations that it was irregularly approved. UDB is a government-owned bank which offers short and long-term financing. 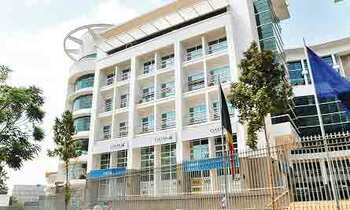 The Police have stopped a sh28b loan payment by the Uganda Development Bank (UDB) to a private company following allegations that it was irregularly approved. UDB is a government-owned bank which offers short and long-term financing.

According to sources, UDB is not allowed to lend more than $2.5m (sh6.6b) to an individual borrower.

The director of the Criminal Intelligence and Investigations Directorate (CIID), Grace Akullo, has directed the bank to stop the disbursement.

“The directorate has received  information  to the effect that the board of directors of Uganda Development Bank Limited approved a loan facility of $11.5m to M/S Savannah Commodities Ltd without adhering to the official lending policy of the bank. You are requested to halt disbursement of the money until these allegations have been fully investigated,” said the Police letter.

UDB chief executive officer Patricia Ojangole has been asked to submit certified copies of the loan application by Savannah Commodities, the appraisal report, the loan offer letter and other documents.

UDB officials are also under investigation over a number of cases including alleged overspending through payments of allowances, increased sittings by the board, securing of more expensive offices, hosting of numerous cocktail parties, depletion of fixed deposits and operational accounts.

Akullo recently appointed a team of detectives led by the commissioner in charge of the anti-corruption desk, Charles Babwetera, to probe the bank.

The detectives have interviewed a number of top officials and scrutinised various documents.

Sources said the loan amount approved represents a significant percentage of the total capitalisation of the bank and means that failure by the bank to recover the loan would have a disastrous outcome.

The loan was approved at the board of directors’ meeting of October 25, 2012, chaired by Makerere University Business School deputy principal, Dr. Samuel Sejjaaka, who could not be reached for comment.

Documents show that the board advised the bank to ‘split the loan facility into two — a term loan component and a working capital component.

According to a letter signed by Ojangole and the bank secretary, Juliet Nagawa Luggya, the board offered Savannah a working capital loan of $6.5m (sh17.3b).

The letter counter-signed by the recipients, Karuhanga as the director and Alfred Mwangi as the general manager, gives the company a grace period of 18 months.

The letter states that the loan was meant to “complete your grain processing project and to finance the working capital requirement of the company and the balance for procurement of coffee, maize, sorghum, wheat, barley, millet and other legumes.”

In another letter dated January 9, 2013 signed by Ojangole and Luggya, that was addressed to Karuhanga, the bank also offered another loan installment amounting to $3.4m (sh9b) repayable over eight years, inclusive of a grace period of 12 months.

The borrower was tasked to ensure that the land attached as security had a title. Other securities to the loan, as per documents submitted to the bank, include a leasehold plot of land at the company site on Nyondo Close in Bugolobi Industrial Area, valued at sh2.5b. However, the Police is investigating reports that the loan advance was largely secured by land which is already mortgaged to Standard Chartered Bank.

However, Luggya said despite the Police’s intervention, the bank would go ahead to process the money as required. She, however, said the bank would give out $9.5m instead of the $11.5m.

“The Police wrote a letter querying some issues and answers were given. This will not stop us from processing the loan because we don’t see anything wrong,” she said.

Luggya accused staff members who were sacked last year of spreading lies about the bank’s operations.

“A development bank can’t operate like a commercial bank. The bank has to support agricultural business without necessarily restricting itself to whether there is a feasible physical loan facility,” she contended.

But sources said the bank is faced with a real risk of insolvency if remedial action is not taken.According to the UDB liquidity report dated January 8, the total cash held in banks was sh33b against total liabilities of sh96b, leaving a deficit of sh62b.

Board not properly constituted

The Police is also investigating allegations that the board of directors that allegedly approved the loan facility was not fully constituted and, therefore, not legally mandated to make such transactions on behalf of the bank.

The bank’s top managers have also been questioned over the rushed decision to relocate from Ruth Towers to their current offices on Rwenzori Towers that was still under renovation.

The Police is following clues on how the procurement process was carried out, leading the bank into legal issues with their former landlord, who dragged them to court for alleged breach of   contract.

The proposed increase in remuneration of the chairman and members’ allowances and retainer fees is also a subject of investigation.

According to the appointment letters, the chairman earns sh750,000 as sitting allowance and a monthly retainer of sh650,000 plus sh200,000 per night when travelling within Uganda in addition to a sh75,000 subsistence allowances.

According to documents the New Vision has seen, the board decided to revise their remuneration basing on a survey commissioned by the former board dated December 19, 2011.

However, Luggya said the figures were mere proposals that will be discussed in the annual general meeting in April.

Other issues under investigation include circumstances under which the former chief executive officer (CEO), Gabriel Otuda Etou, was fired last year  and replaced by the current CEO, who had just been appointed the chief internal auditor. Several other senior staff members were also fired under unclear circumstances.

Luggya also defended the fact that both Sejjaaka and Karuhanga are members of the Stanbic Bank board where the current CEO was resourced from.