Time out for NRM 'rebel' MPs

The grace period for the NRM party rebel MPs recently committed to the disciplinary committee for action has run out. 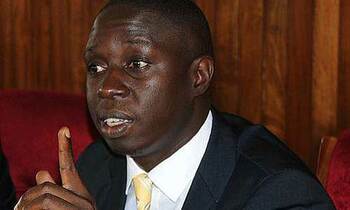 The grace period for the five National Resistance Movement (NRM) party rebel MPs who were recently committed to the disciplinary committee for disciplinary action has run out.

The NRM party caucus spokesperson Evelyn Anite told New Vision that the five MPs will appear before the committee when Parliament returns from recess early this month.

They are accused of criticizing the NRM top party leadership and taking positions contrary to those of the party.

But a reliable source privy to the affairs of the NRM Secretary General’s office said none of the five MPs has filed his defense as required.

Most of the rebel MPs who were summoned have in the recent past openly declared that they will not respect the summons to appear before the committee.

Theodore Ssekikubo said he refused to file his defense because he did not know the right office bearer to address it to.

“I don’t want to address my defense to an unlawful office bearer” the vibrant MP said.

Niwagaba said his reasons for refusing to file defense were many but he could not make them public at the moment.

On his part, Kyamadidi said he did not get the summons at all since he was upcountry. But he said he was ready to appear before the committee if he is officially called.

But Anite said the delay by the MPs to file their defense is wastage of time because there is no way they will escape the disciplinary actions by the party.

There are unverified reports that some of the five MPs especially those from western Uganda have met President Yoweri Museveni and apologized to him individually.

Mbarara Municipality MP Dr. Medard Bitekyerezo is said to have met the President recently and apologized to him during a closed door meeting.

“I am not a kid and not a drunkard. I am a doctor who speaks out my heart. Whatever is said about me is propaganda spearheaded by my opponents.

“But I am ready for anybody who wants to take my seat in the next general elections,” he said.

Time out for NRM rebel MPs