My son's brush with death renewed my faith

Sarah Iga Stores is a Ugandan who has been living in the US for over 30 years. She left Uganda with only her A'level certifi cate, but with hard work and faith, she now owns an insurance company. However, life almost lost meaning when a grisly accident nearly claimed her son's life. Through thi 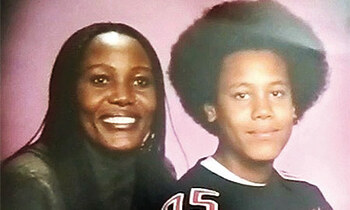 Sarah Iga Stores is a Ugandan who has been living in the US for over 30 years. She left Uganda with only her A'level certifi cate, but with hard work and faith, she now owns an insurance company.

However, life almost lost meaning when a grisly accident nearly claimed her son’s life. Through this experience, she began a new journey of faith, writes Samuel Lutwama.

Having overcome the initial struggles, Sara Iga appreciated how far she had come. Apart from running her own insurance firm, there was nothing that gave her more satisfaction than her son Mikael. But when he was 18 years old, Mikael was involved in a road  accident while riding a sporting motorbike. As her son’s life hang by a thread, Iga sought divine intervention. “Our parents always assured us that with God, all things were possible,” she says.

Iga tried out several odd jobs before starting her business

While growing up, she envisioned her future in a foreign land. She left for the US in 1977, after completing high school to join her elder sister, who was working there and is now the proprietor of Eagles Nest Secondary School.

“As children, we used to muse about people who lived in the US because we heard that the streets were full of money. Although my sisters tried to dispel that long-held opinion, I must admit that when I went there, everyone seemed to lead a comfortable life compared to the Uganda of the 1970s, where there was a breakdown in social, political and economic systems.  However, I had no idea of the challenges ahead of me,” she says.

Iga adds that during the 1970s, jobs were hard to come by in the US, especially casual jobs which were predominantly done by immigrants with minimal qualifi cations. So her first job was working as a mortuary attendant, where she would do facial make up on dead bodies. Although she had received proper training to arm her emotionally for the job, she remained wary of the dead bodies she had to handle daily.

With her earnings, she furthered her education, bought her first car and was able to send money back home to help her siblings and parents. However, Iga later lost the job.

“One day, as I was attending to one of the dead bodies, I imagined that its pulse was active. I was damn scared and that is how I lost my first job,” she says. Iga says she later got another job of cleaning glasses in a restaurant in North California. She soon lost that job after losing balance with a tray full of glasses. Her next job was working in an insurance company in California.

“I was shaken when he told me that he was committed to someone else. God gave me the strength to move on,” she says. Painfully, they reached the inevitable decision to separate. She now immersed herself into being both father and mother to Mikael. Mikael grew into a handsome young man with a special bond with his mother.

At 17 years, he started helping her with the insurance work and everything seemed to be going on well. “I loved my son with all my heart and with time, I started idolising him. I later learnt how wrong it was to idolise anything besides God,” she says.

One day, Iga and her son were working and planned to have dinner together that evening. Mikael left the company; leaving his mother at work. Not long after leaving, Mikael’s sporting motorbike collided with a speeding vehicle. Iga was informed about her son’s accident, but she had no idea of the magnitude of the accident.

Mikael on a life support system

“On reaching the scene, what I saw was a scene that any mother would dread to see. Scattered pieces of flesh and teeth were all over the place. Horrified looks and gasps from those who came to the scene showed there was little hope for my son’s survival,” Iga says. Mikael was whisked away to a nearby hospital in very critical condition. The hospital staff were all shaken, but they had to be professional and work on him. Iga says  the doctor who attended to her son asked her whether Mikael was on the donor list, so that others could benefit from his normal organs.

“I was still in shock when the doctor told me: ‘Your son is virtually dead. But you may sign on his behalf so that we can remove the vital organs before he breathes his last. Someone else might need his organs, after all he is almost dead’. The doctor said this as he stared at Mikael in disbelief. “At that time, I was too emotionally drained to pen my signature on the donor list. Perhaps if I had signed, my son would not be alive today,” she recalls.

After a few days, the doctors brought the full medical report that confi rmed the worst. “Your son has so much severe internal damage. It would be better for him to die because if he lives, he would be helpless,” the doctor said. However, Sarah could not let that happen to her beloved son.

Out of desperation, I turned to God. I called my mother in Uganda who is a prayer warrior and we prayed for Mikael. God answers prayers. Mikael surprised doctors as he continued to hang on to life. One day, something strange happened as Mikael was on a life support machine. His feet, which had been cold since the fatal accident, became warm after I prayed fervently with my mother over the phone.

This breakthrough seemed to signal a new start for Mikael. The next thing was more surprising. I was surprised by my son’s asking: “Where is mummy?” This is the first sentence he said in three months. I sank at his bedside and gave thanks to God. With time, Mikael was discharged from the hospital on a wheelchair after the bandages and metals that were inserted in his body were removed. Although he is not yet back on his feet, he is using crutches and there are signs that he will walk again. I have got for him a good physiotherapist, who is coaching him on how to do things he used to do before the accident. He is making remarkable progress and the muscles which were severely damaged are gaining strength every day.

It strengthened my faith

I learnt a great deal by seeing how Job in the Bible responded to the loss in his life, not cursing God when he could have given up. Like the way God revealed Himself to Job through his own suffering, God revealed  Himself to me when my son’s life was just hanging by a thread. Like Job’s restoration, I was restored in a big measure.

At 50 years, I walked down the aisle and became Mrs. Sarah Iga Stores. I am grateful to God for miraculously healing my son, but above all I learnt a spiritual lesson that has impacted my life since the accident. Looking back, God has blessed me with everything, a successful business, beautiful cars and a son. But yet I had focused my eyes on the things God has given me without focusing on the giver.

My son’s brush with death renewed my faith