KCCA shuts down House of Eden 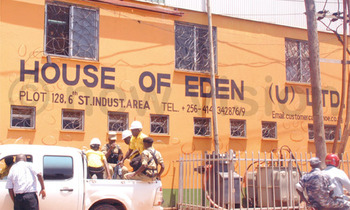 By Carol Kasujja and Juliet Waiswa

KAMPALA Capital City Authority (KCCA) together with Uganda National Bureau of Standards have closed House of Eden that manufactures Safi juice and Azur water for allegedly using expired raw materials. Many of the containers for CARMOSINE, a chemical ingredient for Safi products had two expired dates, one of which indicated that the product had expired.

During an inspection, KCCA says the factory had poor storage conditions for raw materials and products in terms of ventilation, lightning, hygiene, temperatures and space utilization and they had no clear records and systematic procedure for material delivered, stored or retrieved.

According to Robert Kalumba, KCCA's assistant spokesperson, House of Eden has been warned for a long time but they continued to use raw material which is expired, failed to put in place proper sanitary facilities for factory staff, among other violations.

“During our routine industrial inspection, we found out that workers in the store lacked personal protective wear/equipment to handle edible products and raw materials, poor waste management was visible on site and they had no evidence of any signed contracts with licensed companies to handle both domestic and industrial hazardous waste,” said Kalumba.

KCCA and UNBS want House of Eden to recall all Safi products with Carmosine as an ingredient distributed since April 2014 until the time of closure of the store.

“We expect House of Eden (U) LTD to provide all distribution data for Safi products from April 2014 until the time of closure of the store. The data should include the amount of raw materials brought in and/or imported, raw materials used so far and the balance in stock. All batches should indicate manufacturing and expiry dates,” noted Kalumba.

KCCA has ordered all Safi products as at 17th October 2014 not to be distributed to the market until further notice.

The factory has been told to undertake a cleanup and reorganization of the production process, waste stream and raw materials/products stock with close monitoring from the relevant government regulatory agencies.

“We shall continue to do a joint inspection of the factory and stores between KCCA and UNBS,” said James Semuwemba, the director of Public Health and Environment.

Speaking to New Vision, Barbara Kamusiime, the UNBS spokesperson said that during the inspection, they found House of Eden with expired ingredients.

“We closed them because we found them with expired ingredients and expired dates on the products. We want them to put down all the products from the supermarket and retail shops,” said Kamusiime.

Tom Magezi and Ronald Kyomuhendo, house of Eden lawyers said that they have done everything as ordered by KCCA and they are waiting for a letter that allows them to operate again without any disturbance.

KCCA shuts down House of Eden