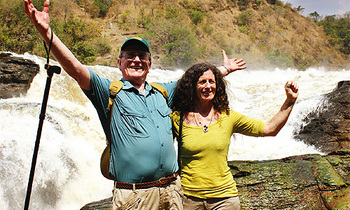 This projection is based on the aggressive marketing, development of new tourist attractions and the ongoing expedition led by Julian Fisher of the Royal Geographical Society.

“After 150 years, David Baker and his daughter Melanie are retracing the footsteps of their great grandfather, Sir Samuel Baker,” said Seguya.

“Fortunately, with the skills of the National Geographic Society and modern technology, we have been able to locate the exact spot where Baker stood the first time he saw Lake Albert,” he added.

David Baker expressed awe as he admired the panoramic landscapes, listened to the waterfalls and bird songs at the lodge. “A lot has changed since my great grandfather first set foot here,” said David.

“I was stunned when I went to Fort Patiko, where he fought slave trade. Using a mobile phone, my 98-year-old mother talked to the Acholi chief (Rwot). He has given me a blow horn to take to her as a gift!” he added.

For two hours, David and Melanie climbed rocky outcrops, snuggled through forests and hopped over seasonal rivers to retrace their ancestor’s footsteps.

David said: “This is a new historical tourist attraction to add onto other products that have been developed in existing protected areas.”

“This is the only way we will have tourists staying longer, spending more money while here and have them so impressed that they will come again or recommend Uganda as a destination,” he added.

“Afoyo matek, webale nnyo and asante sana (Thank you in Acholi, Luganda and Swahili)!” chorused the Bakers after the expedition.