A 13-year-old boy, Allan Ssempagala, is stuck at International Hospital Kampala (IHK) Namuwongo, over unpaid bills amounting to over sh24m that has accrued over the last seven weeks. 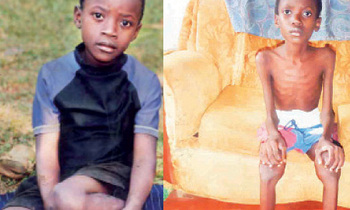 A 13-year-old boy, Allan Ssempagala, is stuck at International Hospital Kampala (IHK) Namuwongo, over unpaid bills amounting to over sh24m that has accrued over the last seven weeks.

Ssempagala’s mother, Lillian Nansamba, a widow, was forced to sell off their home to meet Ssempagala’s medical bills, following an operation at Mengo hospital.

On Friday, the manager at IHK, Alex Alexander, confirmed that Ssempagala had been discharged, but was still at the hospital because his bills had not been paid and that the hospital had been duped by well-wishers, who had brought the boy to the hospital.

“Throughout, we treated him knowing he had sponsors. If they had told us that they were unable to pay, we would have treated him through Hope Ward,” Alexander said, adding: “We need money to pay the surgeon who carried out the operation and the medicine spent on him.”

A statement signed by Brenda Naluyima, a senior sales executive at IHK, reads: “Initial dealings were through a gentleman by the name of Moses Kalanzi. Moses disappeared in December and my understanding from one of our staff was that he had taken off with some money that had been advanced for the boy’s medical care by a donor.”

“Stephen Mukasa then became the contact person at the beginning of January (2013). He (Mukasa) informed us that he would come to the hospital yesterday (Thursday) and make payments to ensure Ssempagala is discharged. He did not show up. Our staff made contact with him today, but he said that he is at a party and will not be able to make it.”

The hospital insists that it does not wish to inconvenience Ssempagala or his family and, “we do appreciate their position, however, while there are some aspects of his treatment that we will waiver, it does remain that we require some payment to be made in order to recover some costs.”

On Friday, Kalanzi refuted allegations that he had gone missing, maintaining he had sacrificed a lot for Ssempagala’s welfare and that he was still fundraising from well-wishers to clear the bill.

When Sunday Vision visited Ssempagala at the hospital on Thursday, the first question he asked was whether we had come to take him home.

At the hospital, Ssempagala is in the care of his 14-year-old sister, Jackline Nandawula.
“We are forced to share a meal and yet he is on medication that requires him to eat a lot,” Nandawula said.
However, it is the journey to trace Ssempagala’s family that further brought us to the stark reality of poverty.

The family resides in the slums of Namungoona. After selling their home, the family was forced to move in with Ssempagala’s great grandmother. According to Nansamba, her son’s ordeal started at Mengo hospital where he was first operated.

“Two months ago, Allan was a normal child, but things changed in December 2012, when Ssempagala returned home from school feeling pain in the stomach. I rushed him to a clinic in Nateete, but nurses there failed to handle the case and referred him to Mengo hospital.”

Ssempagala was diagnosed with severe inflammation of the intestines and was admitted.
“No scan was carried out and yet the doctor recommended an operation. As a lay person, I did not object,” a tearful Nansamba, says.

After the operation, pus was oozing through the stitches. The mother immediately complained to the doctor, who ordered a second operation. Then, faecal matter started passing out from the intestines.
“The bill was growing each day, but there was no sign of my son recovering,” she says.

After pressure from the family, Ssempagala was referred to Mulago Hospital.
“At Mulago, I was told that another operation could not be carried out until Ssempagala had put on some weight,” she adds. But even as they waited for Ssempagala to put on weight, he continued wasting away.

Nansamba ran to the media seeking help and some well-wishers offered help. “I was given food and money and they offered to take my child for further treatment,” she says.

After scouting for a hospital a well-wisher offered to pay the admission fees at IHK.
On admission, Ssempagala, severely malnourished to only 12kg, could not stand unaided and was put on an extensive treatment programme.

After a series of operations by the doctors at the hospital, Ssempagala recovered.