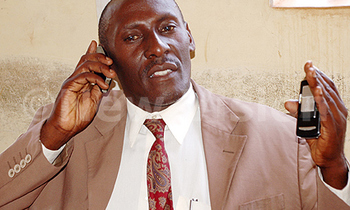 Takuba was jointly charged with one Valentine Bayogera Kajungu who is said to have sold him the land using forged documents. The land reportedly belongs to Pastor Deo Semakula of Holy Ghost Healing Tower Church in Maganjo, along Bombo road.

The two are facing seven counts summarized under charges of forgery of judicial documents, uttering false documents and fraudulent procurement of a certificate of title.

Appearing before Buganda Road Court Chief Magistrate, Boniface Wamala, they denied the charges. The suspects applied for bail but the magistrate rejected it after the state prosecutor, Lino Anguzu, asked court for more time to study the accused’s bail application.

Anguzu said he also needed more time to file a formal objection to the bail application. The suspects were remanded to Luzira until October 25, 2014 when their bail application will be heard.

Pastor Semakula had in April this year applied to privately prosecute Takuba and Kajungu together with the commissioner land registration, Sarah Kulata over alleged land fraud but the Director of Public Prosecutions (DPP), Mike Chibita, took over the case.

The DPP took over the case following a request by the land ministry’s permanent secretary, Gabindadde Musoke arguing that Kulata, who had been summoned, was a public servant. The DPP later advised that Kulata be dropped from the charge sheet on grounds that she was reportedly misled by Takuba and Kajungu into entering the erroneous land transfers.

The pastor is accusing Takuba and Kajungu of fraudulently transferring his land in Wakiso district and subsequently influencing the cancellation of his title by the registrar of titles. The disputed land measuring 7.16 acres on plot 59 Block 107, is located at Nakyesanja-Kawanda in Nabweru sub-county.

Takuba claimed to have bought the land from Kajungu, a transaction Semakula maintains was fraudulent.

According to documents, Semakula bought the land from Tereza Mbirontono, who was the registered owner after she acquired letters of administration for the land that originally belonged to her late son, Samuel Mukungu.

Documents show that the title issued to Kajungu was based on forged letters of administration purportedly acquired by Scolastica Nanteza, who was Mukungu’s wife and that the instrument number on the white page of the title was altered.

A police forensic report signed by forensic document examiner Erisa Sebuwufu and co-signed by Sylvia Chelangat, showed that there were two different signatures on documents that Kajungu claimed were signed by Nanteza (also now deceased).

The police report also revealed that the instrument number (KLA 415261) was altered by modifying figure 5 to make it appear like figure 8.