By the 9:00am, Ugandans from all hamlets had set foot at Kololo Independence Grounds. Milling about in euphoric enthusiasm, they waited for the event to unfold. 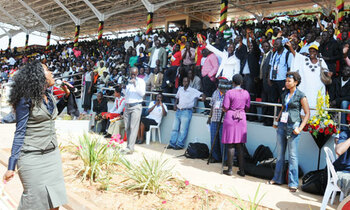 By the 9:00am, Ugandans from all hamlets had set foot at Kololo Independence Grounds. Milling about in euphoric enthusiasm, they waited for the event to unfold.

Some took the opportunity to make cash selling national regalia.
Huge crowds thronged the grounds, many of them eager to be the first to sample the newly constructed pavilion.

Then, armed forces, smart from the boot to the berets, moved forward – signalling the dawn of a new chapter in our history.
Shortly afterwards, distinguished men and women from sisterly nations took their seats before host President Yowri Museveni and wife Janet made a spectacular appearance, waving to a gleeful crowd.

Edward, the Duke of Kent, who handed over the instruments of power at independence on October 9 in 1962,   and 12 visiting presidents were in attendance.

The President inspected the guard of honour. Leading him to the parade ground were a pair of two short, small-sized, stiff, fast-paced fellows in red sashes. This done, a repeat of the 1962 hoisting of the flag followed.

Children performing during the national independence celebrations at Kololo in Kampala

Before anxious eyes, it started well till halfway, when the wind messed up the process. The flag got stuck. Tension struck the crowd, which held its breath.

“What malicious spirit is spoiling our day?” the question many must have asked silently.
“Blame it on the social-political pandemonium the country has faced,” joked Col. Felix Kulayigye, the master of ceremonies.

Luckily, with some more effort, the flag co-operated and flapped higher than its neighbours, drawing ecstatic cheers from the crowd.

The spectacular occasion seemed to indicate meticulous organisation and preparation. The blending of the air force, land forces, Prisons and the Police brass bands gave that much desired effect.

The sound was powerfully sweet.  For a moment I thought I was listening to Beethoven’s symphonies or some other classical orchestra as the Jubilee mood drowned the airstrip.

An Egyptian dancer entertains the guests.

The air manoeuvres by the air force hitched higher the celebratory tempo – at first it were two MI24 helicopter gunships and an M17 in the middle with the national flag flapping beneath its expansive smooth belly.

While all eyes were glued to the sky, an L39 jet emerged, rolling and turning, leaving many marvelling at the boy in there.
This was just jaribu; three L39s, each emitting vapour in the national flag colours, hit the sky. If this was not brilliance, then what was it?

More was to come – three more Sukhoi fighter jets under the command of Capt. Steven Kiggundu, tore through the skies. The chapatti and the soda I had taken earlier in the morning collided in my stomach. I almost dashed to the loos.

Yet one more Sukhoi jet roared above our heads, kicking all the silence from the sky. “Worry not, we are in charge of security,” they seemed to suggest.

As the President enumerated the achievements of the last 50 years, a friendly drizzle fell, perhaps signalling a prosperous future.

It was soon time for playwright Alex Mukulu. His witty choreography left many gasping for more. Jubilee indeed!

Planes paint the Kololo sky with the national colours