A new Auditor General's report into allegations of misuse of the Nuffic Project funds, has exonerated Prof. Venansius Baryamureeba of a number of accusations which had been levelled against him. 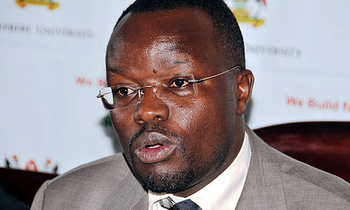 A new Auditor General’s report into allegations of misuse of the Nuffic Project funds, has exonerated Prof. Venansius Baryamureeba of a number of accusations which had been levelled against him.

Much as the auditors raised certain queries on the issue of transfer of funds from the project’s account to the university’s bank accounts, they generally concluded that the matters raised were not material enough to warrant an amendment of the audit opinion earlier issued.

Government auditors had earlier on cleared the project, having found that all the funds had properly been utilised.

For six years, the auditors had expressd ‘unqualified opinions on the project’s financial statements’.  An accountant’s opinion statement can either be qualified or unqualified.

An unqualified opinion is given when the accountant sees that the information given in the financial statements is sound.

A noose has been hanging around Baryamureeba’s neck, since when as the head of the Faculty of Computing and Information Technology he coordinated the project Complaints were raised, prompting the AG to do another audit.

It was alleged that although PhD candidates, who received training at Makerere University got a tuition waiver, tuition was also remitted to them under this project.

The other allegation was conflict of interest in the procurement of the ICT equipment, which resulted in inflated costs of computers.

It was again alleged that funds from the Nuffic Project were irregularly used to fund a construction project.

As to whether the procurement of IT and software was undertaken in accordance with the procurement guidelines, the auditors found out that ICT Consults, a company in which the Nuffic project coordinator had a controlling interest, was awarded a contract through single sourcing.

The company was to supply four smart interactive white boards with accompanying projectors, laptops and accessories at a contract sum of $24,944 (about sh63.6m).

The contract was awarded on grounds that ICT Consults were the sole authorised partners of MS Smart Technologies Ltd.

It was also established that the procuring unit was mindful of the risk of the conflict of interest.

The manufacturers of the smart technologies were contacted on whether they had authorised dealers in Uganda.

Only one manufacturer of Smart Technologies responded, pointing out ICT Consults as their only local supplier.

“We did not come across any instances of conflict of interest in the procurement of the computer equipment from International Business Associates, Southern Business Solutions, Technology Associates and Computer Point.

“We also sought expert advice on the pricing of similar products and our conclusions was that the prices charged were fair and reflected the prevailing market prices at the time of procurement,” the report reads.

The report noted that Nuffic funds amounting to sh1.3b were utilised to settle works relating to the construction of the extension of the Faculty of ICT building.

The project records indicate that this amount had been provided for in the project budget to cater for the finishing and furnishing of a floor of the centre of excellence.

The auditors also noted that the project coordinator, in a 2007 letter to the vice-chancellor, also copied to the university secretary, stated that “Out of the 1.5m Euros, a total of 527,000 Euros is for finishing and furnishing one floor on the new building.”

“Therefore, the allegation that the Nuffic funding for the building had not been disclosed to the university authorities has no basis,” the report reads.

In spite of the gaps in maintenance of the staff time record book, the auditors concluded that, “the outputs from these staff were, to a large extent, evident from our interviews of staff and the review of the project management and project completion reports.”

These non-payable hours will cease when the last student on the project completes,” concludes the report.

Uganda’s public universities were allocated and received 170,000 Euros to cater for tuition costs for the 20 PhD students.

Instead, a lump-sum payment of student costs was made annually from the project account to the Faculty of ICT and later into the university’s fees collection account.

The auditors conclude that “there was lack of clarity in the project guidelines and the university fees payment guidelines over the modalities of payment of fees for project sponsored students.”

In the earlier report, the AG said the transfer of funds from the Nuffi c project accounts to the operations account of the faculty, instead of the university fees collection account, was not consistent with the university’s guidelines for fees payment.

The AG also said the project coordinator explained that Makerere University’s guidelines for payment of school fees were silent on whether money from projects for tuition should be paid directly into the Council fees collection account or routed through the host institution.

Prof. Barya told the auditors that paying the faculty, which, in turn, paid to Makerere University Council account, was not a breach of the fees payment guidelines.

History of the project

The beneficiary universities were Makerere, Kyambogo, Mbarara and Gulu.

The total project’s funding was 5,699,414 Euros, which was shared by the Northern (universities in Netherlands) and Southern Partners (Uganda’s four public universities).

The main beneficiaries of the project were university staff, students and ICT policy-makers.

Prof. Barya was the head of the team comprising coordinators from each of the four public universities. The project ended in May 2011.

However, formal complaints had been filed.