Police in Jinja has arrested officers in the fisheries ministry for trying to extort sh3m from a local businessman. 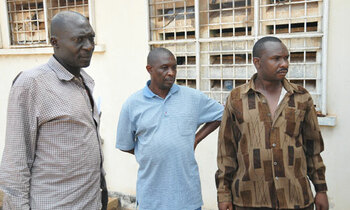 By Donald Kirya in Jinja

Police in Jinja has arrested three people including two enforcement officers from the ministry of fisheries over their alleged engagement in a bribe with a businessman.

The said bribery case involved having the officers 'trade' back to the businessman illegal fishing gear they had confiscated from him.

Herbert Matovu, the newly posted head of operations of the fisheries department in the ministry, his colleague, Shaban Kasibante and their driver Bruno Sserunkuuma demanded sh3m for the illegal exchange.

But the deal involving the businessman identified as Godfrey Suuna was intercepted by Police on Tuesday.

He said the trio was caught demanding money from Suuna in order to release bundles of illegal fishing gears which they had initially confiscated from him.true

Police had established that the suspects were authorized to work in the fisheries department in Jinja, Lubega said on Friday at Nalufenya Police Station.

“Though they were lawfully on duty and in the process of executing their duty, they committed an offence when they demanded shs3m to release illegal fishing gear which they had confiscated from Suuna’s shop and stores,” he said.

Suuna, the businessman involved informed Police about the forceful demand of money by Matovu and his accomplices.

Following the tip, Police located the suspects and apprehended them.

Lubega explained that it was not an isolated incident – fishermen have complained before that Matovu and his clique extort money from them.

Most of the complaints come down to the same thing. The suspects have always confiscated fishing gear and asked for money for a reverse trade.

“As Police, we condemn the act. These people [fisheries enforcement officers] come at Police and ask for security to go and do their duty and in many cases people think that Police is involved yet it’s not the case,” Lubega said.

The people who go to police to complain are usually asked to provide proof of the act to use as evidence to pin the suspects during arrests.

Police is looking to prefer charges of demanding money with menaces against the trio as bundles of some of the fishing gear lie at Nalufenya Police Station.