A declaration issued after the summit said that defense ministers from the 14-member states will convene immediately to take steps to implement this directive. 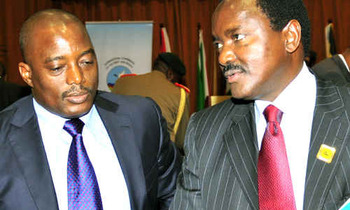 THE proposed international neutral force to pacify the Eastern Democratic Republic of Congo (DRC) will be deployed within three months, regional leaders meeting in Kampala have resolved.

A declaration issued after the summit hosted at Speke Resort Munyonyo said that defense ministers from the 14-member states of the International Conference on the Great Lakes Region (ICGLR) will convene immediately to take steps to implement this directive.

"The summit expresses appreciation to the United Republic of Tanzania for its offer to contribute troops to the neutral international force and call upon other member states to make the same commitment within one month," the communiqué read out by International Relations minister, Henry Okello Oryem said.

The summit under the auspices of the ICGLR is the third such gathering in the past two months since M23 rebels launched war on the Government of President Kabila in April.

Attending the meeting, the third in two months, were DR Congo President Joseph Kabila, and his counterparts from Tanzania, Jakaya Kikwete, and South Sudan, Salva Kiir. The first was held at the AU headquarters in Addis Ababa in July while the second was held in Munyonyo on August 7.

The leaders meet again on October 8 in Kampala to review progress. In a related development, the UN Secretary General Ban Ki-moon has convened a mini-summit on the crisis in Eastern DRC on September 27 in New York, USA on the sidelines of the UN General Assembly.President Joseph Kabila among other leaders attended.

According to the statement issued after the summit, the neutral force will be deployed with the mandate of the African Union and the United Nations. ICGLR member states which sit on the AU Peace and Security Council; Angola, the Republic of Congo, Kenya and Tanzania were tasked to make a joint presentation for approval of the deployment while the AU was urged to seek UN support.

President Yoweri Museveni who is the current chairperson of ICGLR summit was asked to formally request African states, regional and international partners to provide financial, logistical and technical support to operationalization of the force.

"The summits (also) requests the chairperson of the ICGLR to continue with his diplomatic engagement with parties to the conflict in Eastern DRC with a view to securing a complete cessation of hostilities and putting an end to the crisis, if feasible, through peaceful political means," the communiqué said.

An expanded joint verification mechanism (JVM) and joint intelligence fusion center (JIFC) will be launched by the defense ministers and the Executive Secretary of the ICGLR on September 14. Members states were asked to deploy their officers ahead of that date.

The fighting in Eastern DRC has displaced over 226,000 people in North Kivu alone since April while over 57,000 Congolese crossed into Rwanda and Uganda where they live as refugees.

During the August summit in Munyonyo the leaders created the ICGLR Humanitarian Trust Fund to which Uganda pledged $1m. On Saturday, it was announced, other countries had made offers; DRC ($1m), Tanzania ($0.5m) and Kenya ($0.5m).