Hardly a month after President Yoweri Museveni commissioned the sh165b Mukono-Katosi- Nyenga road works, it has emerged that the contractor allegedly used fraudulent documents to secure the deal 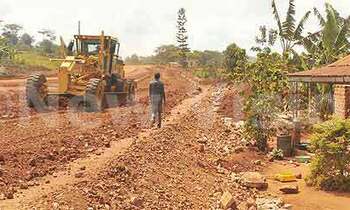 Hardly a month after President Yoweri Museveni commissioned the sh165b Mukono-Katosi- Nyenga road works, it has emerged that the contractor allegedly used fraudulent documents to secure the deal.

As a result, finance ministry permanent secretary Keith Muhakanizi, who is also the secretary to the Treasury, has asked the Inspectorate of Government to investigate the alleged sh24.7b already paid out to the contractor, Eutaw Construction Company, a US fi rm and take appropriate action.

“I have information that a fraudulent transaction involving payment of over sh24b to Eutaw was effected by Uganda National Roads Authority (UNRA). I have also been informed that Eutaw forged an insurance bond purportedly from SWICO,” he wrote in a July 9 letter.

The IGG will investigate reports that a forged advance payment security and performance guarantee were issued by Housing Finance bank to Eutaw and accepted by UNRA.

New Vision has learnt that Kansiime has since left the bank. The bank’s acting head of corporate banking, Eric Seguya, said he was not aware of the documents. Seguya referred New Vision to the bank’s head of business, Chris Kabagambe,
but he did not pick our calls.

Investigations show that all the sh24.7b has since been withdrawn from Housing Finance, mainly by the Eutaw country representative, Apolo Senkeeto. According to the Police, Eutaw has no visible offi ces in the country. New Vision
could not confi rm whether Senkeeto has the powers of attorney for the US fim.

Documents show that on January 28, 2014, sh24,7b was wired to the Eutaw account number 1600000998 which by December 23, 2013 had a deposit of sh100,000 only. There was unexplained deposit of sh500m by a Chinese fi rm ChongQing International Construction company to Eutaw account, but New vision could not establish whether this is
the firm currently on site.

Investigations further show that by June 30 2014, only sh10m was left on the account. Sources told New Vision that UNRA’s legal department ought to have verifi ed the documents presented before the 74km road deal was sealed.

Sources in State House said the under-the-table deal on the construction of the road was shocking given that the President was not aware before the commissioning.

Muhakanizi’s request for a probe comes at a time when the Police are also investigating the deal. Besides, the Police are probing circumstances under which Eutaw quietly sub-contracted work on the road to a yet-to-be-identified Chinese
fi rm without the consent of UNRA. The Police said the Chinese firm was subcontracted 100% of the project and paid sh14b.

This, Police said, was wrong since Eutaw was only allowed to sub-contract 30% of the work. A tour of the road works revealed that the Chinese have already put their equipment on the ground and work is ongoing. Investigations
by the Special Investigations Division (SID) indicate that UNRA did not do enough due diligence on Eutaw before awarding the contract.

The SID commandant, Charles Kataratambi, said they were investigating the insurance bond from SWICO, an advance payment security and performance guarantee from Housing Finance.

Sources told New Vision that on July 11, Kataratambi and other security operatives attached to State House interrogated the acting UNRA executive director, Eng. Ben Ssebugga Kimeze, over the contract for about four hours at Okello House in Kampala.

But when contacted, Kimeze denied ever being grilled by the Police or other security operatives. Kimeze, however, said he was aware of the ongoing investigations. “It is UNRA that detected the forgeries and notifi ed the Police about the development,” Kimeze stated.

UNRA spokesperson Dan Alinange said after detecting the forgery, Eutaw was notifi ed and they have submitted another advance payment guarantee, which is under verifi cation. About the Chinese sub-contractor, Alinange said Eutaw has to formalise the process so that the sub-contractor’s capacity can be weighed.

“Just like it is done to other companies that supply forged guarantees to UNRA, we shall work with the PPDA and other agencies to take necessary steps. UNRA is going to carry out more due diligence on Eutaw to determine whether they continue with the contract or not.

The decision will also depend on the advice of government lawyers,” Alinage observed.

He revealed that if they discover any negligence by UNRA staff upon completing their internal investigations, they will punish them. UNRA is also yet to compensate the residents affected by the road.

When the contractor wanted to start clearing the road boundaries recently, residents along the road protested saying they should be compensated first. President Museveni flagged off the road project on July 7. It was meant to be upgraded from gravel to bitumen standard.

The Police said they are hunting for Senkeeto after failing to get him on his known cell phone. “I have invited him (Senkeeto) to the SID, but he has failed to turn up,” Kataratambi noted.

When New Vision contacted him, however, Senkeeto said Eutaw was executing the contract. “Because of the tight  mobilisation deadlines in this contract and the importance of timely completion, Eutaw has procured the supply of equipment and materials from locally available sources which includes supplies from Chinese companies that have a lot of idle capacity in Uganda,” Senkeeto said.

A web search showed that the American company has branches on Commerce Street in Aberdeen, Orchard lane in Madison and on Richton Road in Petal with a fl eet of equipment valued at about $35m (about sh90b).

The company website shows that Eutaw has over 32 years of experience and has constructed hundreds of miles of state and federal highways, utility projects, large-scale site construction, demolition and providing disaster relief.