Isolated native people wearing loincloths and carrying bows and arrows made contact with the outside world. 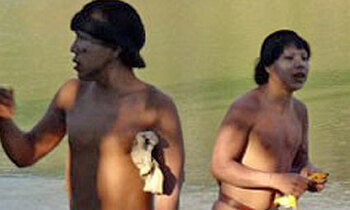 RIO DE JANEIRO - Isolated native people wearing loincloths and carrying bows and arrows have emerged from the Amazon rainforest and made contact with the outside world in a video released by Brazil's indigenous authority.

The video shows indigenous people from the Panoan linguistic group making contact with the Ashaninka native people of northern Brazil along the banks of the Envira River, near the Peruvian border.

In one scene, an ethnic Ashaninka in athletic shorts gives bananas to two loincloth-clad natives who appear wary of approaching, quickly grabbing the fruit and then retreating out of arm's reach.

After the native people made initial contact with the Ashaninka on June 26, a team from Brazil's National Indian Foundation (FUNAI) traveled to the area and filmed a second encounter on June 30, according to news portal G1, which posted the video online (http://g1.globo.com/ac/acre/noticia/2014/07/video-mostra-momento-de-contato-com-indios-isolados-no-acre.html).

The people, identified as members of a group known as the Rio Xinane, at first emerged only briefly and then returned to the forest, said FUNAI official Carlos Travassos.

"They were whistling and making animal sounds," he said.

Two Panoan indigenous interpreters were then called in to speak with them on their next visit.

"They speak our language. I was so happy we could talk to each other," said one of the interpreters, Jaminawa Jose Correia.

He said the natives had come in search of weapons and allies.

"They described being attacked by non-native people and many died after coming down with the flu and diphtheria," he told G1.

Anthropologist Terri Aquino said the group had probably come in search of axes, knives and pots.

"This is a people looking for technology. It's important in their lives because there's an internal war among them and because of contact with non-indigenous groups," he said.

Another scene in the video shows the natives taking axes from the ethnic Ashaninka village of Simpatia.

FUNAI said the group had returned from the forest after their initial visit because they had contracted the flu. A government medical team was sent to treat seven from the group.

Rights group Survival International said the episode was extremely worrying, since influenza epidemics have wiped out entire tribes in the past.

The Brazilian Amazon has the largest number of uncontacted tribes in the world at 77, FUNAI estimates.