Kikubamutwe a ghetto haunted by hooliganism

Until October 31, New Vision will devote space to highlight the plight of slum dwellers. At a later date, we shall profile those offering selfless service to improve conditions in these areas. Today, STEPHEN SSENKAABA exposes the squalid conditions in Kikubamutwe 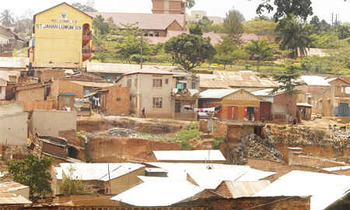 Until October 31, New Vision will devote space to highlight the plight of slum dwellers. At a later date, we shall profile those offering selfless service to improve conditions in these areas. Today, STEPHEN SSENKAABA exposes the squalid conditions in Kikubamutwe

I was game; good game. I knew this the moment this fair skinned prostitute cast an inviting eye in my direction. Her intentions were clear. Her wiggling bottom teased my eyes as she approached my table with amorous intent.

Ainembabazi had a good case. “Listen,” she implored “How do you expect me to take care of my personal needs with just sh5,000? I need to pay the owner of the lodge and keep some money for my children when they come to visit.”

For just sh7,000 Ainembabazi was willing to offer me casual sex. “But it would be only the ‘short one’,” she said, to mean that if agreed upon, our session would not last more than a couple of minutes. We were to have it inside an adjoining room that serves as an extension to this bar.

Not even the dim lights in the little dungeon where we sat on plastic chairs could hide Ainembabazi’s anguish. “I do not like to be a prostitute,” she said, “but I need to earn a living.” A single mother, Ainembabazi lives in a single room with her two teenage children.

“I take care of them myself,” she says. Every night she has to sleep with a number of men to secure enough savings for herself and her children.

She also has to share a certain percentage of her proceeds with the owners of the lodge as payment forthe space where she has sex with her ‘clients’. “Are you ready,” she asked. “Sorry, I don’t have enough money,” I said. She angrily walked away.

We were seated in a little nameless shack that doubled as a bar and lodge in Kikubamutwe, a notorious slum in Makindye Division. It was midnight and life was just starting. Ainembabazi works in this bar as a maid by day and a prostitute by night.

She is one of the many young women, who ply their trade in this shabby slum every night. According to Betty Kizza, the chairperson of Muzaana Zone, one of the 13 zones here, prostitution is one of the major economic activities in Kikubamutwe.

“Women of all ages come from all over the place to engage in prostitution here,” she says. Kizza attributes this trend to absence of jobs and a permissive society. A stealth neighbourhood Kikubamutwe is stealthily sandwiched between Kabalagala and lower Muyenga.

It has a tiny entry, off the Kabalagala-Muyenga Road,which you never see until you come close. It disappears into an alley of little dirty shacks made of shops, food stalls, boda-boda stations and one-room rental houses.

Along the way, you find a church, a clinic and a hospital. These stretch several metres from the main entry. Life is difficult here, but somehow people manage to push on.

In a tiny mud-and-wattle room, we found a young mother, 24-year-old Yudaya Namaso (name changed) with her two-year-old child. “We live here with my mother and two brothers,” she said. A long tired sooty curtain divides the room into two sections — a bedroom and a living room.

“When night falls, we pull out a mattress and lay it on the ground of the ‘living room’ for my two brothers to sleep. I share the only bed in the house with my child and mother,” she says. “At day break, they all walk out of the house to their jobs and leave me behind to take care of the home.” Namaso says life here would be bearable “except that they are too many hooligans around”.

Ainembabazi and Namaso are among 64% of Uganda’s slumdwelling urban population today. Their shacks comprise the 64.3% of all the dwelling units in Kampala as revealed by the National Household Survey.

Taking the attribute of living space, the survey further shows that the percentage of overcrowded dwellings in Uganda (that is with more than two persons per room) is 49% in the urban compared to 56% in the rural.

The living conditions of the two women fit well into the UNHabitat definition of a slum as lacking safe water, proper sanitation, security and are usually overcrowded. The conditions resonates with the Uganda Population and Housing Census (2002) finding that more than 70% of the dwelling units in the country are substandard — built out of temporary materials that cannot maintain their stability for more than three years.

A hub for hooligans Hooliganism haunts Kikubamutwe like a ghost. “Every night we have to be on the look-out for thieves,” says Namaso. Such is the mark of hooliganism that this place got its name from it more than 30 years ago. “In the 1970s this area was notorious for armed robbers, who waylaid residents and stole their property.

Whenever they were caught, these robbers would be hit on the head as a punishment,” recalls Kizza. Since then, this place has been referred to as Kikubamutwe (which loosely translates to ‘head-hitter’).

There is suspicion that the hooligans, who terrorise this neighbourhood are the unemployed young men who loiter around during day. Many of them are believed to be on drugs. “Thousands of our young people today are jobless and this has led them to crime,” says Kizza.

“I am concerned about all this, but I understand why things are like this. People don’t have money.” Frustration is written all over Kikubamutwe — from the little boy scouring the rubbish bin for food by the roadside to the lad sweating his way through a chapatti baking exercise next to an open roadside sewer. I found Kizza seated in a makeshift shelter in the company of bloodshot eyed men sipping at glittering glasses of waragi.

It was just midday. Making a difference in difficult circumstances Dire as the situation might be, there are people who are trying to improve the situation in this sorry neighbourhood. I

n this collective effort to check security, the residents formed security committees to ensure that residents are protected from armed robberies and other forms of crime.

“We have been pooling resources as residents of this place and putting this money together to pay security personnel to guard our homes and property, especially at night,” says Kizza.

Residents responded well to this call and indeed security had slowly improved. However, she remarks, this good initiative is being undermined by lethargy.

“People are no longer keen on paying this money,” she laments. A cocktail of problems afflicts Kikubamutwe, but life goes on. The residents have tried, but not done much. They seem to be overwhelmed.

Kikubamutwe a ghetto haunted by hooliganism