When rain falls on Ssalongo Peter Ddaki's farm, not a single is allowed to go to waste. 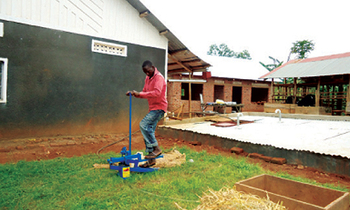 When rain falls on Ssalongo Peter Ddaki’s farm, not a single drop is allowed to go to waste.

Every drop of water that falls on the family house is directed into gutters (engogo), attached to the roof, which in turn directs the water to an underground water tank in which it is stored.

The big underground tank looks like a house constructed underground. Although Ddaki says you can have a tank of any size, his tank is 18 feet long, 11 feet wide and 5.5 feet deep. While most tanks have concrete walls and floors, this one also has a special water holding polythene sheet, lined along the walls.

Ddaki covered the tank with iron sheets to prevent contamination of the water during floods and to prevent children from falling in. A hole, the size of a common manhole cover was then created through the iron sheets. It is through this that a hose pipe is placed to access the water.

Ddaki, a resident of Nyendo town council in Masaka, says the water harvesting innovation is earning them a lot of money.

This tank was constructed for him under the Crop Livestock Integration Programme, that is intended to improve food security. The programme falls under the National Agricultural Research Organisation and the National Livestock Resources Research Institute and supported by the Association for Strengthening Agricultural Research in Eastern and Central Africa. In Uganda, the programme is being implemented in Masaka and Ngora districts.  The project focuses on scaling technologies to improve the productivity of the dairy and vegetable farms.

Ddaki also says this system has revolutionised his farm.

“We have another big house under construction in the compound. As soon as it is completed, we shall connect gutters onto it,” he says.

The water harvesting was made even easier after the family got a wonder irrigation pump from the project.

“Before we got it, we used a jerrycan whose top had been cut off to draw water. We now simply pump the water into the farm,” Ddaki adds.

According to Dr. Jolly Kabirizi, who is the principal investigator of the project, the wonder pump costs about sh300,000 on the open market. In addition to the pedal pump, the farmer is also given a 500-metre long hose pipe.

The benefits of the pump for the family have been tremendous.

“Previously, we used to grow vegetables seasonally, but now we grow them all the time,” says Ddaki’s wife Nnalongo Maria.

The wonder pump has also made it easy to water the two family cows.

“All we do is to direct the hose pipe attached to the pump into the cattle watering trough and then pedal away. The pump is so simple, it can even be pedaled by a child,” Ddaki says.

What you need to have it
For farmers who may want to have the tank constructed on their farms, the basic requirements include an iron-roofed house, a set of gutters that are connected to the roof to tap water and manpower to dig the tank.

One will also need a polythene sheet that lines the walls of the tank, which cost between sh40,000 and sh100,000, depending on the size, at least five iron sheets to cover the water tank and the wonder irrigation pump to ease drawing of water on the farm. In total, sh600,000 can get you this innovation.