To mark 50 years of Uganda's independence, New Vision will, until October 9, 2012, be publishing highlights of events and pro ling personalities who have shaped the history of this country. 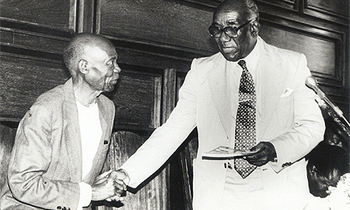 To mark 50 years of Uganda’s independence, New Vision will, until October 9, 2012, be publishing highlights of events and pro ling personalities who have shaped the history of this country. Today, JOSEPH SSEMUTOOKE reviews the archives and brings the story of Michael Bazzebulala Nsimbi, the academic, who was passionate about the preservation of culture and language of the Baganda and later the cultures of all Ugandans

He has been described in different publications as ‘the father of Ganda Literature’, ‘the grand-old-man of Ganda linguistics’, and ‘a champion of the writing down of the cultural histories of Uganda’s various ethnic groups’, among others.

Veteran journalist and social critic, Joachim Buwembo, describes him as one of the greatest Ugandans ever, saying through his writings and activism, he not only gave the country great literature, but also taught it how to read and write its own languages.

In the 1980s, Jimmy Katumba composed a song eulogising his genius in promoting the writing, preservation and teaching of Ganda language and culture.

Upon his death in 1994, the Buganda Lukiiko (parliament) declared him a kingdom hero, and then Katikiiro Joseph Mulwanyamuli Ssemwogere described him as ‘a-oneof a kind fi gure whose scholarship and activism was unlikely to be replicated.’

It is the legacy left by Michael Bazzebulala Nsimbi (1910-1994) that has led to his unanimous lauding as an extraordinary literary and cultural writer, who did a lot to promote local languages and culture.

Publications
The enduring legacy of Nsimbi as a cultural icon are his written works. Nsimbi wrote 16 books over a 50-year-period from 1940 to 1990.

Some works are fi ction, while others are factual and they tell the cultural history of Buganda. The latter works have been highly acclaimed and popular right from their publication to this day.

His works are especially lauded for their role in developing the Luganda orthography and historiography as well as for the standards of their writing.

Orthography refers to the standardised system for writing a particular language, including rules of spelling, grammar, punctuation and capitalisation, among others. Nsimbi is the unrivalled developer of the orthography through his works such as Empandika Y’Olulimi Oluganda (the writing of the Luganda language).

Historiography refers to the study of the history, critically examining sources to verify a given social, political, economic or any other history.

Nsimbi is credited with having followed up on the foundational works of people such as Sir Apollo Kaggwa to give Buganda’s history an organised and sequential existence, as well as expanding the boundaries to research on areas like Buganda’s names.

Activist for local culture
Beyond his writings, Nsimbi was an activist of local literature and cultures, undertaking several efforts to promote the writing of literature, cultural and social histories among others.

In 1950, he formed Ekibiina Ky’olulimi Oluganda (the Luganda society) for the purpose of preserving and promoting Luganda writing through proper speaking, writing and teaching.

Heading the body between 1963 and 1980, Nsimbi worked hand-in-hand with other Luganda language writers and activists, most notably Livingstone Walusimbi, to promote the teaching of Luganda at all levels of education.

Nsimbi did not only promote Luganda, but encouraged other Ugandan tribes to begin preserving and promoting their languages among their people, even to get their languages taught in schools.

While teaching at Kyambogo in the 1950s and 1960s, he was in charge of vernaculars and ensured his non-Baganda students got back to write their own languages.

He also represented Uganda at the African Conference on Native Languages in Nairobi in the 1950s, advocating for the teaching of local languages in the Ugandan education system when he returned.

All through his life, Nsimbi was known as a vocal advocate for the promotion of our African culture and norms, always encouraging people to preserve and promote the good in their culture, while also picking what was good from the west.

Awards
For his role in preserving and promoting local languages, history and culture at large, Nsimbi received a number of awards. In 1960, the colonial government gave him the title of Member of the British Empire.

A few days after his death, Buganda kingdom declared him a hero, under a scheme they devised to establish a square where all kingdom heroes would have plaques raised in their memory. In 1994 still, the Luganda society named its scholarship scheme for the best Luganda students the M.B. Nsimbi Scholarship Scheme.

Nsimbi’s father was a writer, being one of the earliest people employed by the missionaries to help them translate work into Luganda. He died when Nsimbi was young.

Nsimbi studied at St. Henry’s College, Kitovu, St. Mary’s College, Kisubi and Makerere College School where he graduated as a teacher. From there he taught at Rubaga Boys School and also taught at Tabora in Tanzania, before returning as assistant inspector of schools in 1938.

He became the fi rst native to be made a full Inspector of Schools in 1942 and after further studies at the University of Bristol in 1948 became a tutor at Kyambogo Teachers’ Training College.

Nsimbi was married to Rosemary Nansubuga who passed on in 1965. He got married again to Ursula Nalwoga and is survived by 20 children and several grandchildren.