A QUARTER of all youths in the country, between ages 20 to 29, have more than one sexual partner. 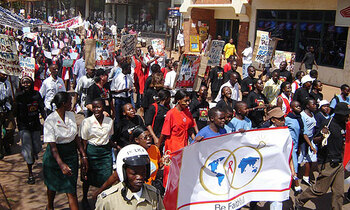 A QUARTER of all youths in the country, between ages 20 to 29, have more than one sexual partner, according to the latest preliminary Uganda Demographic and Health Survey report.

Of all the youths in the country in the same age bracket there are 43.7% males who are having two or more sexual partners, compared to only 6.2% females.

More so, teen-age girls and boys are also increasingly likely to have multiple sexual partners much as they are not well educated on the best way to prevent transmission of the HIV virus, a study that is expected to heighten concern about sexually transmitted diseases.

Other studies have shown that the earlier the sexual activities are initiated in teenagers, the faster they move on to other sexual partners.

The proportion of women with two or more sexual partners in the past 12 months is higher among women who live in urban areas, divorced, separated or widowed and those who live in Central and East Central regions.

Meanwhile, the proportion of men with two or more sexual partners in the past 12 months is higher among men aged 40 to 49 (29 percent), men who are currently in union (26 percent), and those in urban areas (25%).

The preliminary report also adds that the mean number of sexual partners for men increases as they grow older.

In regard to regions, most of the men with multiple sexual partners are from Central (21 percent), followed Karamoja (26%), and East Central (25 percent). The report makes no mention of Western and Northern.

The same report also shows that the proportion of men with two or more sexual partners in the past one year varies by level of education. It is highest among those with no education compared to men who are slightly educated.

Even though an overwhelming majority said condoms reduce the risk of getting the AIDS virus, only 31 percent of women (aged 14 to 49) and 18 percent of men (aged 15 to 59) reported using them during their last sexual intercourse.

The surveys are done with the objective of providing updated estimates of basic demographic and health indicators. However, it is only the 2006 and 2011 that covered the whole country.