Men, it is gossip, not discussion

WALKING through Kampala, your eyes will certainly not miss how busy the city is. The taxi operators shouting on top of their voices in an effort to get passengers, while the street preachers scream their lungs out in praise of their God. 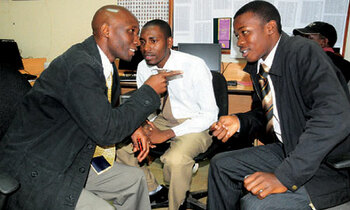 WALKING through Kampala, your eyes will certainly not miss how busy the city is. The taxi operators shouting on top of their voices in an effort to get passengers, while the street preachers scream their lungs out in praise of their God.

But look more closely and your eyes will not miss groups of men huddled together, talking. Sometimes the conversation may trigger an argument that may get out of hand as tempers flare. Other times, they will burst out laughing so hard that any curious person would want to know what it is they have been discussing.

According to the Oxford English Dictionary, gossip is defined as idle talk, groundless rumours or unrestrained talk about people or social incidents. Focusing on this definition, gossip would be the best word to describe the talk that keeps these men active.

Many people believe gossip is restricted to women.

But the truth is men too gossip, although many defend the habbit, claiming they ‘discuss issues’.

Many men will talk about the clothes a woman wears and how tight her pants are, not forgetting to mention how curvy they make her appear, how short her skirt or dress is and how the high heels a woman wears, make her walk uncomfortably.

Men also gossip about fellow men, discussing one’s multiple sexual partners, imaginery or real. They also talk about their wealth and investments and the wealth and properties of other people.

A guy will drop in his opinion about how he knows the real cause of the endless fights between Singers Jose Chameleone, Bobi Wine, Weasle and Bebe Cool.  He will also try to explain how someone acquired his wealth. From politics, to sports to women, men gossip about it all.

Lois Ochieng, a counselling psychologist at Healing Talk Centre, Nakawa, says gossip is a behaviour that one learns from their environment or surrounding. If he associates with people who are gossips, he will certainly find himself picking up the habit.

Living in an environment where people do not mind their business will groom a potential gossip. “Whether it is a man or a woman, it is not possible that a person was born with such traits. Habits are only acquired,” says Ochieng.

She adds that people with a low self-esteem are more likely to gossip. Most people will gossip about others with an intention to bring them down. They gossip, hoping to be recognised as informed people and this boosts their self-esteem.

Others gossip because of jealousy. It might be that a person has been promoted at work and colleagues will gossip simply because they have not come to terms with their friend’s promotion. “It is jealousy that would make him gossip about the new car that his friend bought or the beautiful lady he is dating,” Ochieng adds.

Others just love making fun of the rest, so it pushes them to gossip. For example, when he gossips about a lady dressed in leggings, or tight pants, he would not have any serious intention other than to make fun of her.

Gossip is as dangerous as an ulcer because it spoils one’s reputation. Like the Bible says, a good name is to be chosen rather than great riches. It takes a lot for one to build a reputation and yet a wiff of malicious gossip can ruin it.

The rumour about singer Jose Chameleone getting his wealth through witchcraft, was a character assassination ploy aimed at discouraging his fans from supporting him.

There have been stories of best friends becoming terrible enemies, all because of gossip.

However much men try to justify what they do, it is still gossip and it is frowned upon. So, we ought to help those who gossip to drop the habbit.

Men, it is gossip, not discussion