It is estimated that one of every six children does not have access to clean water. According to the United Nations Children's Fund (UNICEF), an international development agency that focuses on children's survival and development, about 1.5 million children worldwide die every year from diarrhoea or other waterborne diseases like dysentery, cholera and salmonellosis. 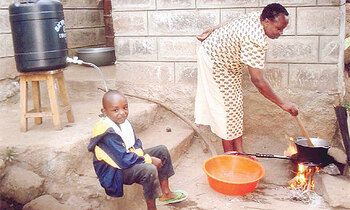 It is estimated that one of every six children does not have access to clean water. According to the United Nations Children’s Fund (UNICEF), an international development agency that focuses on children’s survival and development, about 1.5 million children worldwide die every year from diarrhoea or other waterborne diseases like dysentery, cholera and salmonellosis.
Yet, if everyone boiled their drinking water, such deaths would be avoided. In most cases, it is usually the lack of enough heating energy that makes people drink water that is not boiled.
More often, most homes are trying to keep the heating bill low since electricity, charcoal, firewood, or whatever heating source is costly.
As a result, families take chances with water that is not boiled; after all it looks clean. Ultimately, disease sets in and all the money saved in trying to keep the heating bills low is spent on treating preventable diseases, sometimes unsuccessfully when the patient passes on.
And now this is bound to change with the Jompy water boiler, a rather simple solution to the severe problem.
A recent innovation by Scottish plumber and heating engineer David Osborne, the Jompy water boiler could be the answer to diseases that result from consuming contaminated water, especially if Ugandans can embrace it.
This device made Finalist at the 2010 BBC World Challenge Award in the category of innovation. This competition rewards innovative ideas that excel in ability to make a difference in the lives of people at the grassroots level.
Advantages One of the Jompy’s major strengths is the fact that it allows you to use the same heating energy to perform two tasks simultaneously; that is boiling water while cooking.
According to inventor Osborne, this saves you up to 60% of your energy resources that would otherwise be consumed on boiling water and food separately.
“Plus, it reduces the time you spend operating on an open fire, which is usually the cause of respiratory and eye problems,” says Osborne, who has also invented other products for the UK market in the line of fires, cars and solar panels.
The revolutionary Jompy has been on the market for a year now, mostly in Kenya and South Africa, where its sales representatives have been selling both in retail and bulk to organisations and governments who want to distribute the product to their communities that have difficulty accessing clean water.
Meanwhile, research is currently underway to find distributors in other markets around the world.
In Uganda, a testing of the Jompy is underway in Kandago, Kabale district, which happens to have one of the biggest water and sanitation problems in the country.
The area was chosen by Osborne’s partners, the Tearfund, a UK-based water and sanitation foundation, and the Kigezi Diocese Water and Sanitation Project.
In Kabale, Glasgow University PhD student, Lena Hiltrop, has spent the last two weeks introducing the Jompy and collecting data that will be used in assessing the health and social impact that Jompy will have. 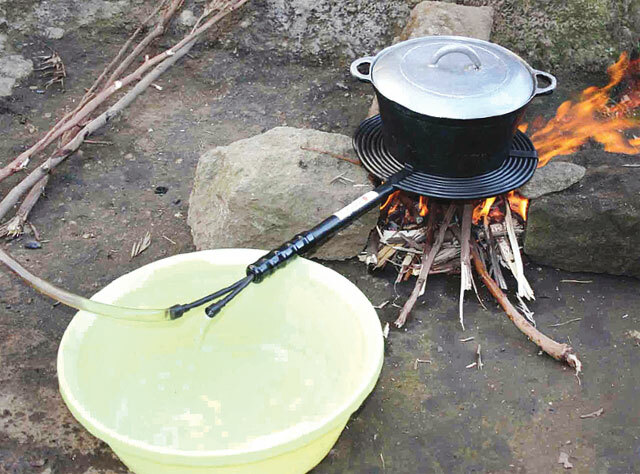 UPCLOSE: The Jompy at work
So far a total of 50 households in Kandago are using the Jompy, while another 50 of the chosen sample do not have it. One group is to use the Jompy water boiler whenever, while the other is to follow its routine. While at it, they are to study trends around their lives while providing intermediate feedback during the testing phase.
They are to pay attention to such detail as how easy or hard it gets to always have boiled water in their homes, how much fuel they use or save in getting their water boiled, whether there are situations where any group has to forego boiling their water.
“It is upon the completion of this report that it will be decided whether Uganda becomes the next market for the product. Plus, all the families used in the research will get a complimentary Jompy device,” says Hiltrop, also an energy consultant with Siemens.
If Uganda is signed up, dealerships and other business entities are in for a killing, as the Jompy is not only purchased by individuals, but also aid agencies and water sanitation programmes seeking to improve the lives of the communities they serve.
A light, robust and maintenance-free kit, the Jompy is also preferred by campers and other groups of people involved in leisure and outdoor activities, all because of its easy-to-use attributes.
The innovation, according to Osborne, was inspired by a visit the inventor made to South Africa shortly after making a solar water heater, which did not register with South Africans because most homes did not have solar panels since they were expensive.
“The people there told me they needed a device they could use on the ordinary man’s open fire source since the majority used firewood to cook, so I came up with the Jompy,” says Osborne, adding that people’s feedback on the Jompy has been amazing.
&ldq

Breast cancer risk: It''s not all in the family