KALE Kayihura, the Inspector General of Police has expressed fear that the high rates of unemployment among the youths pose a great threat to the security of the country. By Benedict Okethwengu in Nebbi

KALE Kayihura, the Inspector General of Police has expressed fear that the high rates of unemployment among the youths pose a great threat to the security of the country. He said due to unemployment the youths have become mercenaries who can be hired by anybody to cause unrest.

“As a country we have a big problem, the high rate of employment among the youths is a time bomb for us,” he said.

Kayihura said though the country is facing tough economic challenges there need to be a mechanism to address the socio- economic issues affecting the youths.

He was speaking on Friday (October, 28, 2011) at Rajja Hall in Nebbi Town during a dialogue organized for, political, religious leaders in Nebbi and William Esrom Alenyo, Robert Okumu, the rival contenders for Nebbi LC5 leadership.

The dialogue was organized by the Inspector General of Police (IGP) to forge way towards peace in the district as the two political heavy weights fight their political battle in Court. 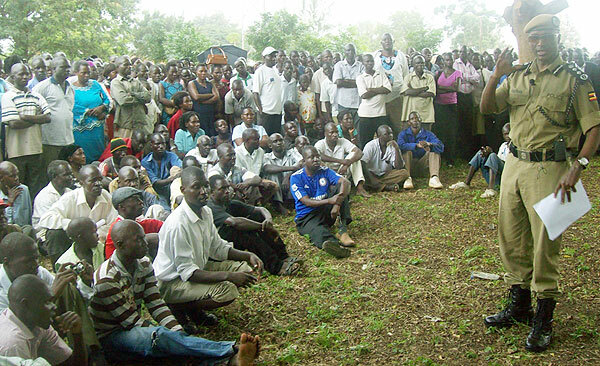 Two people were killed on October, 17 as result of the violence that erupted in Nebbi Town after supporters of William Esrom Alenyo went wild following an injunction issued by the court of appeal that blocked Alenyo to be sworn in as chairman LC.5 Nebbi.

Kayihura said the police will give one million shillings each to the families who have lost their dear ones.

He said the police will also foot all the medical bills of those who have been injured during the violence.

The dialogue was attended by Badru Kiggundu, the Chairman electoral commission and Patrick Mutabwire, the director Local government administration in the Ministry of Local Government.

Kayihura challenged the district leaders to consider youths as a priority to benefit from government programs like National Agricultural Advisory Services (NAADS) and Northern Uganda Action Fund (NUSAF2) to avoid them engaging in moral acts.

Patrick Mutabwire, the director Local government administration in the Ministry of Local Government said the ministry will organize a retreat for the leaders in the district on how to develop the district. He noted that leadership is about addressing economic issues and welfare of the people.

“I want to promise that after this political standoff is resolved, we shall organize a retreat for you (leaders) on how to develop the district and heal the wounds that was caused by the violence,” he said.

Mutabwire warned civil servant in the district against engaging in politics and forming cliques at work places.

Badru Kiggundu, the Chairman electoral commission appealed to both Okumu and Alenyo to wait for court decision. He urged the two rival parties to help their supporters understand matters in court.

He praised William Esrom Alenyo and Robert Okumu for showing good gestures to their supporters by greeting each other. The political rivalry between Okumu and Alenyo had gone so hot that the two would not want to see eye to eye.

Both Alenyo and Okumu said they will abide by the court decision. The urged their supporters to avoid causing violence.