POLICE Tuesday said it had arrested 15 members of the opposition on the charge of treason for taking part in the new wave of walk-to-work demonstrations called by the pressure group Activists for Change (A4C).

POLICE Tuesday said it had arrested 15 members of the opposition on the charge of treason for taking part in the new wave of walk-to-work demonstrations called by the pressure group Activists for Change (A4C).

Addressing the press at the media c entre police boss Maj. Gen. Kale Kayihura said the police was in possession of credible information linking the pressure group to treasonable activities.

The group, whose main objective, he said, is to over throw a duly elected government was only using the walk to work campaign as a guise and to cast itself as a pro suffering entity whereas not. A4c, he said, has been deceitful in an attempt to hood wink the country as to its agenda.

“Today, is wish to share with the public information, indeed evidence, that the A4C has not been honest with the country, and that its real objective the country into chaos, and in the process overthrow the government,” Kayihura  said.

Below is Kayihura full statement

Last week, Hon. Mathias Mpuuga, wrote to me, and informed me that he, together with others, operating under the banner of A4C, planned to carry out a series of activities, culminating in a public rally at the Kololo Independence grounds on Saturday, the 22nd of October, 2011. 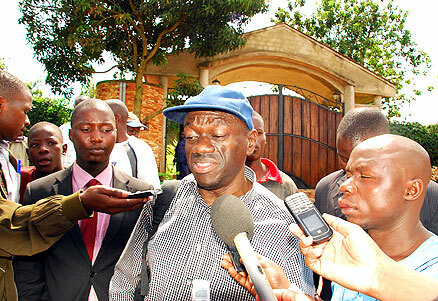 Dr. Kizza Besigye addresses journalists outside his home in Kasangati after the police intercepted him and dumped him at his house. Right is his aide Martin Byomuhangi  who was beaten and his clothes torn. Besigye later gave him his shirt. Photo by Eddie Ssejjoba

In my response, I laid various reasons why it would be inappropriate to hold their activities at this time, including the fact that they had not met the basic requirements for their functions to proceed. A copy of both letters is available for your perusal.

One of the reasons I gave was that I had received petitions from different groups and individuals, with the common concern that the planned activities of Hon. Mpuuga’s group, which included paralyzing of public transport, would grossly infringe on personal liberties, as well as inconveniencing tens of thousands of children sitting their national examinations, the examiners and the schools as well.

I noted the overwhelming public outcry and condemnation that followed the announcement of their plans and, in addition to the other reasons spelt out in my letter, decided that, in the interests of maintaining law and order, and safeguarding life and property, as Police is constitutionally mandated to, stopped the holding of the activities.

At this point, I wish to thank the general public, and specifically the parents, business groups and individuals, who not only expressed their displeasure publicly, but went ahead to shun the unlawful activities of this group. I wish to thank all those who called the Police to report, and those who worked with the Police, to preserve the peace, and maintain law and order.

A few criminal elements, who attempted to disturb the peace, by stoning motorists and blocking the roads, were dealt with swiftly and firmly. As of last evening, a total of 45 persons had been arrested across the country.

I would like, at this point, to address and share with you information, on one issue that has been a key concern for the Government, in relation to the activities and objectives of this spate of orchestrated disorder.

From the outset, the Government insisted that the objective of these agents of chaos was not as noble as they claimed it was. The so-called A4C insisted that they are just ordinary citizens, who are concerned about the rising cost of living and the escalating prices of essential, and they wished to exercise their constitutional right to demonstrate and petition.

Today, I wish to share with the public information, indeed evidence, that the A4C has not been honest with the country, and that its real objective is to plunge the country into chaos, and, in the process, overthrow the Government.

On 23rd of September, 2011, the A4C, led by one of its leaders called Ingrid Turinawe, hosted a group of youth, who they called ‘commanders’ from several areas around Kampala, at their offices along Katonga Road in Kampala.

A recording of the proceedings of this meeting is available, and we are willing to share it with the public.

At this meeting, Ms Ingrid Turinawe, the A4C leader commended the commanders, and singled out the group from Kisseka Market, for their violence in previous incidents, and exhorted them to forcibly stop people from driving during their walk-to-work campaigns, saying, quote, ‘let me start with people from kiseka market about forcing cars to stop, because convincing them to park will not help. That one, you are free. Whatever strategy you use, make sure the car does not move. You are free… whatever erupts, like cars being burnt, is not our concern or responsibility. The propaganda will be intensified to portray that security agents are the ones burning the cars. We shall tell the public that activists cannot burn the cars nor do any damage’.

The meeting further observed that, quote, ‘the task rema