The money will cater for weekend clash against Ghana and also last month double header against Egypt in the World Cup Qualifiers. 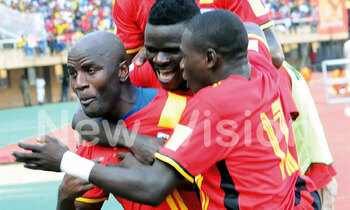 Uganda Cranes preparations for the 2018 FIFA World Cup Qualifiers have been boosted by the financial support of sh1bn from the Government.

The money will cater for weekend clash against Ghana and also last month double header against Egypt in the World Cup Qualifiers.

Previously, the FUFA delegation led by its president Moses Magogo held a meeting with minister of education and sports Janet Museveni, minister of state for sports Charles Bakkabulindi, permanent secretary Alex Kakooza and other officials. The FUFA officials presented a budget of sh1.3bn to cater for post-match expenses for both games such as players' and coaches' allowances, bonuses, air tickets, accommodation, practice match (Madagascar) and other related costs.

In the meeting, the First Lady cautioned the sports federations to always plan in time since government is willing to support them.

The Cranes will host Ghana this Saturday at Mandela National stadium Namboole where they hope to brighten their chances of making it to the World Cup in Russia next year.

They are second in group E with seven points, two points below Egypt. Ghana and Congo-Brazzaville come third and fourth with five and one point respectively.