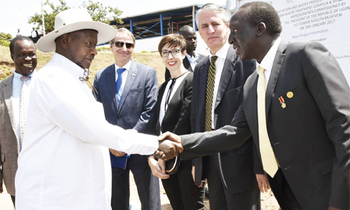 October 3 was declared a national day in Germany following the reunification in 1990. It is celebrated as a public holiday every year. After the end of World War II, Germany was split into two; the German Democratic Republic (GDR), also referred to as East Germany and the Federal Republic of Germany (West Germany).

The divide was further widened by the building of the Berlin Wall in 1961. On September 4, 1989, citizens of Leipzig protested peacefully against the GDR government.

They called for political reform and opening the borders. On November 9, 1989, the checkpoints between the two countries were opened and people were allowed to travel freely.

This date marked the "fall" of the Berlin Wall. In 1990, free elections were held, resulting in the GDR being dissolved and Germany officially reuniting on October 3. Both countries signed the treaty of unification in August 1990.

Since then, the reunification day is celebrated as a public holiday in Germany. On that day, big public celebrations are organised where speeches are made by politicians and other leaders, concerts held, communal meals prepared, food and cultural presentations made from each region of the country and the day is crowned with fireworks.

Each year, a different city hosts the national celebrations. October 3 is the only national holiday in Germany as all other holidays are administered by the individual states. Many mosques in Germany are open to the general public on that day.

This is an initiative to stimulate contact between Muslims and non- Muslims and to emphasise the role that Muslims played in forming modern Germany.

On this day, post offices, banks and many other businesses are closed while bakeries, fuel stations and stores at railway stations, airports and highways remain operational.

Transport charges on that day are reduced to almost zero, depending on where one is travelling to. Notable during the celebrations is the display of images of the Brandenburg Gate and the Berlin Wall's destruction.

These were the two important symbols of Germany's division during World War II. The German flag is also raised on public buildings to symbolise the freedom of Germany as a whole. In the past, the black colour symbolised the darkness of servitude, red the bloody conflict and gold the light of freedom.  CLICK HERE FOR MORE ON THIS STORY

MINISTRY OF WATER AND ENVIRONMENT