Fred Enanga the Police spokesperson addressing journalists at Uganda Media Centre on May 25.

The ministry of works and transport set the parking fees at the standard of sh20, 000. This is the measure the ministry came up with to help in controlling the movement behaviour of truck drivers as one way of curbing the spread of coronavirus in Uganda.

"We are coming out to warn all managers at the designated stopovers to stop overcharging truck drivers. All complaints of extortion and abuse must be reported to the nearby police station by the cargo truck drivers," Police spokesperson Fred Enanga said.

Enanga instructed all the officers surveilling and policing the designated stopovers to ensure that the security of the cargo truck drivers is maintained as they refresh themselves before they journey on with their trucks.

In the last one week, Enanga said a total of 46 incidents of concern were registered throughout the country, leading to the arrest of 417 persons. 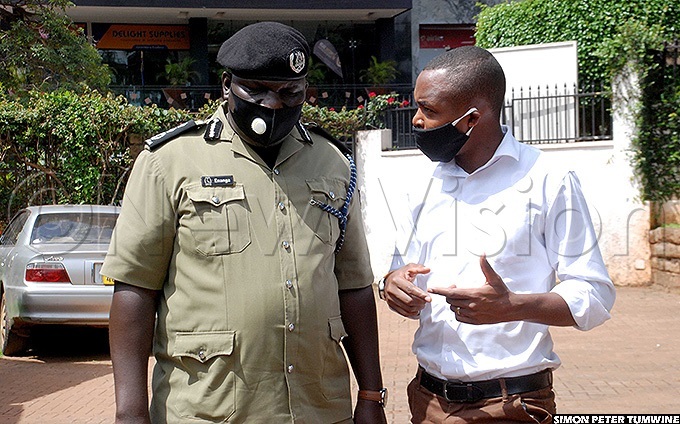 Fred Enanga interacting with a journalist at Uganda Media Centre

"These included three teachers of Pajobi Primary School in Pakwach district who were found teaching 31 pupils of P.7 class. We impounded 36 motorcycles for illegal transportation of passengers and movement during curfew hours.

Some boda boda riders and drivers have continued to flout the Presidential directive on the prevention of COVID-19 by carrying non-authorized persons," he said.

He added; "During the week, one Fuso driver and 29 motorcycles were impounded while transporting passengers and 10 persons were arrested.

Therefore, we want to advise drivers and riders to cooperate with security during this period."

He added that in Kitebere, Kabukanga and Kamina sub-county in Kagadi district, police arrested people who were distributing food illegally to the members of the public.

"One was identified as Livingstone Akugizibwe an LC5 councilor who was found distributing maize flour to the victims of floods in the parishes of Kitebere and Kabukanga in Ndaiga sub-county and another identified as Issa Arinitwe," Enanga said.

Nagginda to miss Baganda US meet

Prepare your children for the future - Nagginda