Former employees of Uganda Airlines cut a cake during their re-union in Kampala recently. Photos by Patricia Turyahebwa

It was a joyful day filled with smiles and tears of happiness at Terranga Restaurant in Bugolobi as the former staff of the defunct Uganda Airlines Corporation with IATA code QU celebrated their maiden reunion.

They cherished memories with an airline where emotions were stimulated.

There were tears of joy as each other could not believe that their colleagues were still alive, many shook their heads in disbelief, others could realise their colleagues changed body features but not their names. 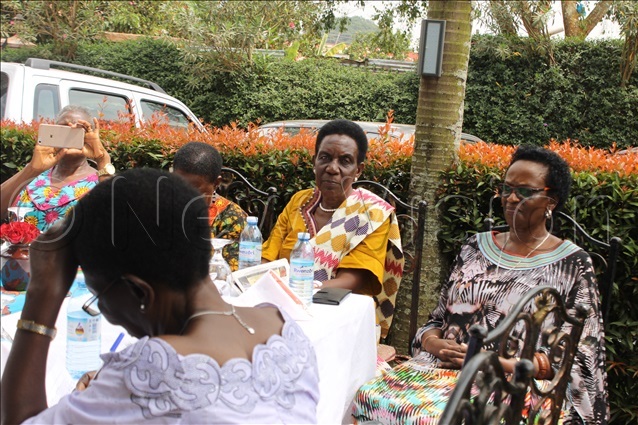 The banner that was hung on Terranga billboard in the gardens expressed part of the memories, virtually every person yearned to have a photo in its background to capture history. 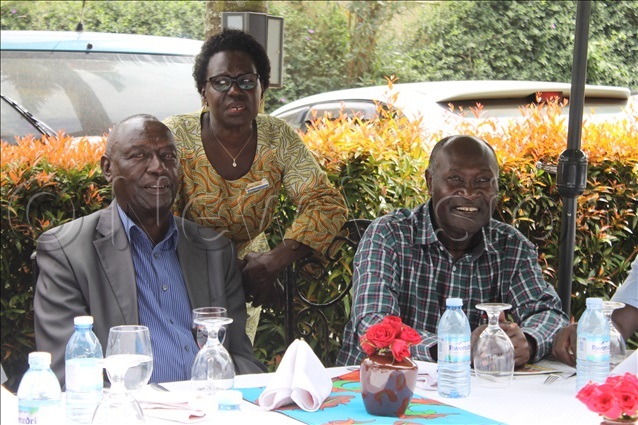 The event attracted over 60 ex-staff members who worked at different departments and were entertained with oldies music which matches their age.

As each one of them stood up to introduce themselves to the general audience, they mentioned their staff numbers and departments to which they belonged and recalled the old times. 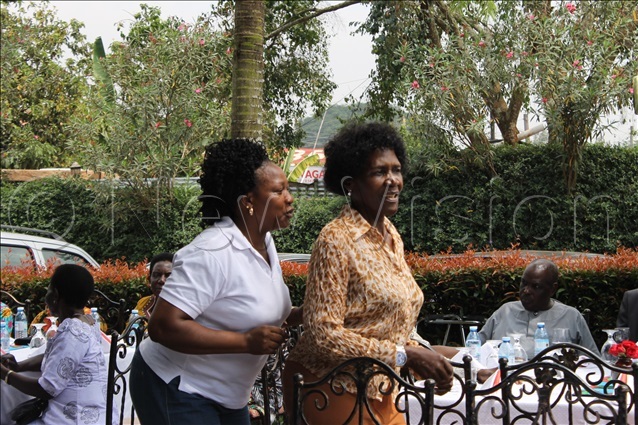 Mackenzie Ogweng, formerly an aircraft engineer reminded his colleagues how he would exchange with Pilots during B707 preflight inspections at Entebbe Airport.

Capt. Wegoye who was involved in a car accident in Iganga two months earlier joined the event supported by clutches. He could not hide his happiness to meet old colleagues.

One person came dressed up in a former staff uniform green jacket, with a red necktie and a badge pinned on his jacket evoking memories on the role of his department.

Lawrence Olupot, who worked with Uganda Airlines as a maintenance engineering manager, said to date, he has been proud of being in charge of Pope John Paul's II visit to Uganda. 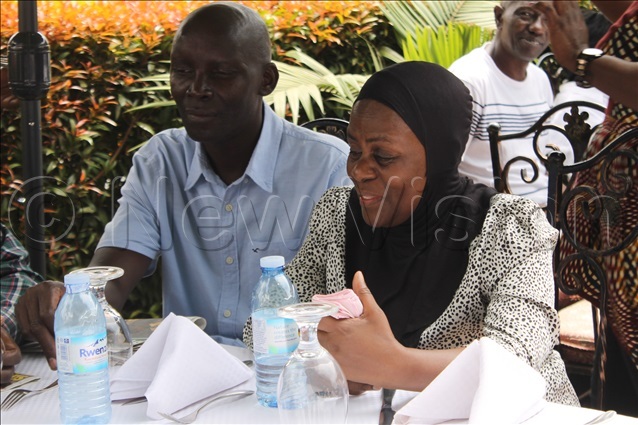 "When the Pope came to Uganda in February 1993, the government had prior requested Uganda Airlines to fly him to Kasese, Tororo, and Soroti. As a department, we ensured high craft safety standards and cleanliness that befitted the dignity of the Popes ‘caliber to travel in," Lawrence expounded. Olupot's pride is perhaps shared with John Bosco Sserunjogi, a former cabin staff who said he will never forget the day he flew with Pope John Paul II. 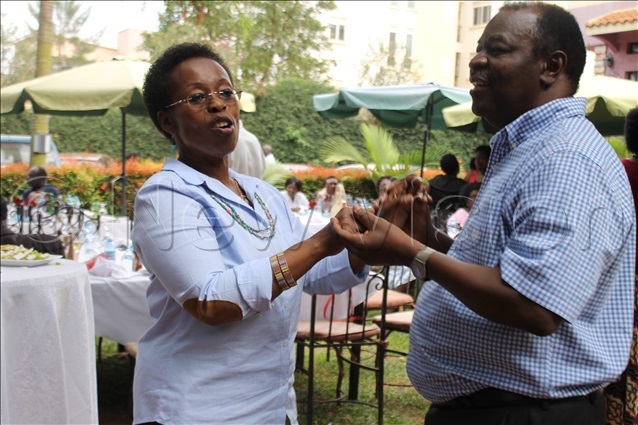 I was selected to be among those who organized the popes' visit. I met with him, during the flight to Kasese, Tororo

"What is memorable up to now is that I was selected to arrange the Pope's visit and more so, I interfaced, met and flew with him to Kasese, Tororo, Gulu and it's not an opportunity that you just look for. It was a golden opportunity that I will never forget," Sserunjogi said. 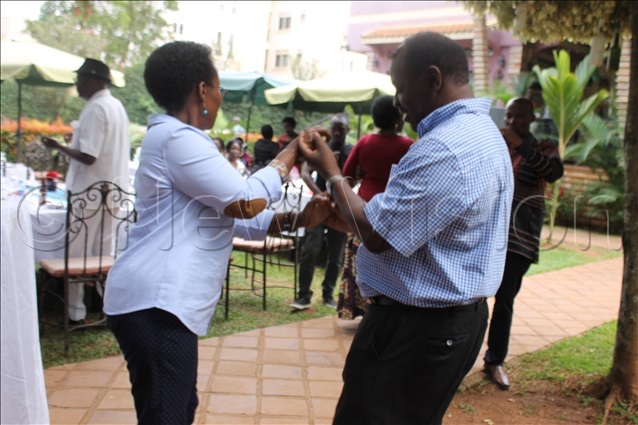 Charles Karabarinde, also a former with Uganda Airlines from 1982, and now flying a bombardier with the new Uganda Airlines also joined the colleagues to share old memories. He is optimistic that the new company has the potential for economic success in the future given the steadily improving passenger numbers and planned routes. 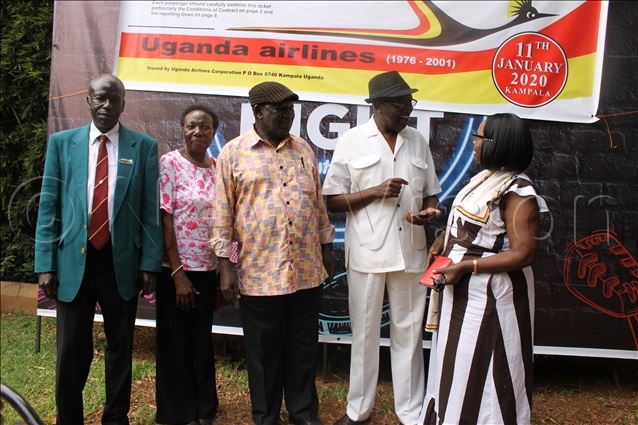 "Currently everything has changed. The number of passengers has increased. In the next three months, we shall take different routes compared to the Uganda Airlines of the 1980s," Karabarinde said.

Abu baker Mawejje, the organizer of the reunion who worked as a training manager at Uganda Airlines said the reunion brought together the old memories and expressed respect to the heroes who managed the airline until it ceased operations. ‘'it's over 25 years since we unceremoniously dispersed from the company that changed our lives. we are really excited to see each other again. The reunion was exciting and revived old memories,'' Mawejje said.

Asked about how he felt when the company was brought down, Mawejje responded that he was not amused about its closure because it had a brighter future despite challenges. Uganda Airlines Corporation was established in 1976 and commenced operations in 1977 with the main aim of providing an air link with the global world. But Uganda is a landlocked country, it was strategic to have an airline with commercial considerations.

Around that time, East African Airways Corporation (EAAC) jointly owned by three countries including Uganda, Kenya, and Tanzania faced uncertainties, due to political crises that threatened its future operations. Following the collapse of EAA in 1977, many former staff joined Uganda Airlines which changed the lives of staff and perhaps expose them to international networks.

It ceased operations in 2001 due to several challenges like huge foreign currency expenses with a backlog of unsettled debts.

This eventually led to the liquidation of Uganda Airlines Corporation in May 2001. In 2019, the government revived the airline.