The Speaker of Parliament, Rebecca Kadaga, has asked Parliament staff and MPs to be professional while handling the Commonwealth Parliamentary Association delegates.

Speaking at the opening of a one-week training on Wednesday evening attended by MPs, Parliament staff, security officers, officers from the foreign affairs ministry and other Ugandans who plan to attend the conference, Kadaga said the officers should be extremely professional because this is the only way Uganda is going to sell its image abroad.

"Be professional. Don't stare at the delegates who dress differently. If you are a lady welcoming a Muslim delegate, don't shake hands if them if their religion does not allow," she said.

Kadaga also tipped officers on etiquette saying that the protocol officers are going to be representing the country and it is important they avoid behaving in the manner that will offend the delegates.

She cautioned the officers not to wear miniskirts, wear green hair and also know something about the countries where the delegates come from.

"When eating, please don't load your plate and please don't mix the food and fruits. Eat slowly," she said referring to an incident when a Ugandan delegate was chocked by a piece of meat at an international conference while eating in a hurry. 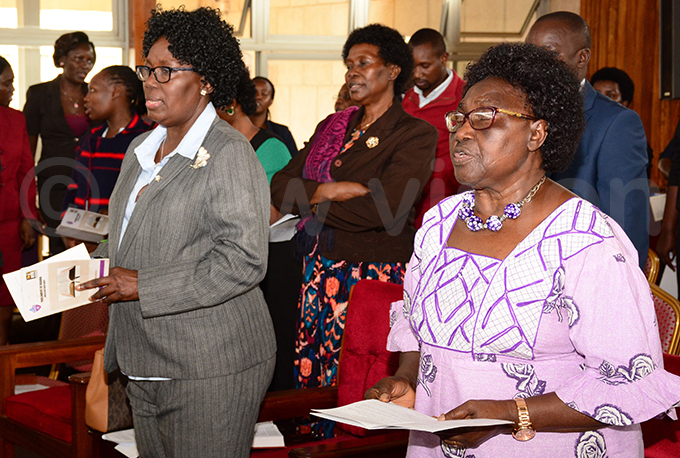 "When he got chocked, our President asked his escort Lt Gen. Wilson Mbadi to go and help him. Mbadi hit him on the back and the piece of meat landed in front of then Tanzanian President Jakaya Kikwete," she said sending the trainees into laughter.

She also cautioned the officers against taking the delegates to insecure places especially those who want to go out and dance.

"Don't take them to Bwaise, please. Ensure that the coordinators and security know their whereabouts," she said.

On those in charge of ensuring the welfare of the delegates, Kadaga cautioned them not to get too close to them in order to avoid giving birth to children who will never know their fathers.

"Don't take risks. Don't get involved. You get involved with a man from Jamaica, you will never see him again. Please, I warn you do not get too close to those people. When you escort them to their rooms, stop at the door. You can put inside their luggage but together with the Hotel waiter. Don't loiter in those rooms. Just do your work and get out," Kadaga advised.

The Parliament of Uganda is set to host the 64th Commonwealth Parliamentary Conference (CPC) from September 22 to 29, 2019.

The conference will be held under the theme ‘Adaption, engagement, and evolution of parliaments in a rapidly changing Commonwealth'.

Uganda offered to host the 64th Commonwealth Parliamentary Conference that is preceded by the 63rd session that was held in Dakar, Bangladesh in 2017.

Kadaga is the current president of the Commonwealth Parliamentary Association.